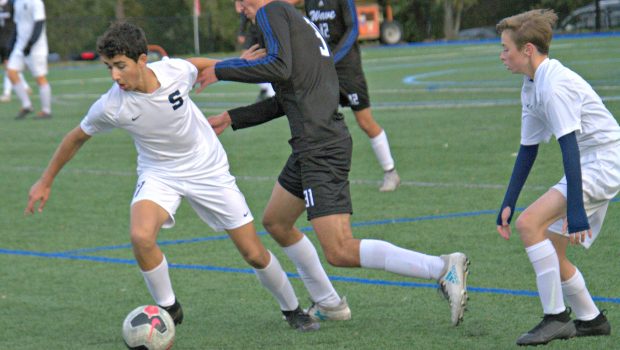 The Wreckers played some of their best soccer of the year in the first half at Darien this afternoon. Then they kicked it up several notches after intermission.

There was quick passing, strong combination play, smart switches of fields, balls sent wide and driven into the box. Sam Liles was a force on the right side; Patricio Perez Elorza and Murilo Moreno led at midfield, Surya Balaji commanded the back 4, and Benny Feuer served dangerous crosses.

It did not matter.

The Wreckers spotted the Blue Wave a goal just 1:34 into the match, off an unwise pass in the final third that went awry.The hosts connected again 20 minutes later. Careless marking on a corner kick led to a strongly headed goal.

Darien tacked on a third before halftime — and almost had a fourth, on a wind-aided shot.

Staples regrouped. They came out on fire, powered by the knowledge of previous Wrecker sides that rallied from a 3-goal deficit.

But despite strong efforts — both individual and team — from Emerson Anvari, Evan Birns, Lars Djuve, George Smith and their teammates, Staples continued their scoreless run. They had chances, in the run of play and from set pieces. But the Wave defense held strong, and keeper Branca corraled all threats.

Finally — with 8:06 to go — Ryan Thomas launched a shot. Branca bobbled it, and Haydn Siroka pounced. If he had not been there, Aidan Mermagen would have converted.

It was a much-needed shot in the arm, and Staples continued to press. They could not break through again, though. Once again, they lost a chance to pick up 3 points. With 4 matches left in the regular season, they’re in a dogfight for an FCIAC playoff berth.

QUICK KICKS:  The reserves played very well, in a 4-1 victory over Darien. A great effort by Graham Barnes ended with a top-corner finish. Reese Watkins earned a penalty kick, which Zach Pulichino buried. Then Marcos Inglada cut back and laced a top corner shot. The 4th goal came from a gorgeous ball by Aaron Jaffe to Gabe Chinitz, who took an excellent touch and an even better finish.

Matt Shackelford scored 2 minutes into the Darien game, for coach Chris O’Dell’s freshmen. Kyle Ambrose and Ethan Cukier scored before halftime; so did Joaquim Monerrat on a wind-aided corner kick. Shackelford finished the scoring. The final was 5-1. Josh Deitch controlled the middle of the field.