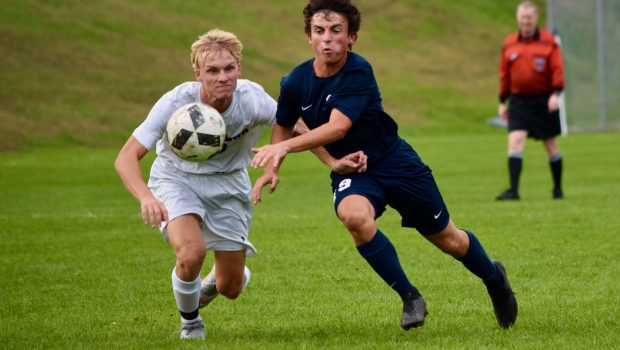 Brien McMahon coach Rodrigo Guzman is a proud alum of his school. In his 3rd year as head coach, he’s got the Senators on a solid upward path. They play good team soccer, and Castillero and Pardo are a dangerous tandem.

But Staples is playing good soccer too. And early pressure paid off. Just 1:20 after kickoff, Lefty Penderakis’ work up top yielded a giveaway. Josh DeDomenico was right there to hammer in a quick goal.

Wrecker pressure led to the 2nd score, in the 24th minute. Sam Liles pounced on a loose ball in the penalty area, and finished strongly.

The 2nd half began with Austin Sholes chesting over to Penderakis, for an attempt that flew just just high.

McMahon refused to concede, and 2 minutes later keeper Ry Cohen was forced into a save.

Patricio Perez Elorza ripped a shot off the post in the 50th. A Staples follow-up would have padded their lead.

Liles, DeDomenico and Mauricio Inglada combined nicely up top, but the 3rd goal — in the 59th minute — came from both excellent teamwork and old-fashioned tenacity.

Brendan Lynch played a 1-2 with Inglada, and got the ball right back. Lynch powered his way through, ramming in the insurance tally from close range.

The freshmen shut out Brien McMahon 3-0 in a night match. An own goal off a corner kick was followed by strikes from Matt Jordan and Aidan Mermagen. Will Adams controlled the game, while Brewster Galley was strong defensively. Sam Liles is even more determined than his Brien McMahon defender to get to the ball. (Photo/Armelle Daniels) Callum Wisher serves out of the back. (Photo/Armelle Daniels)