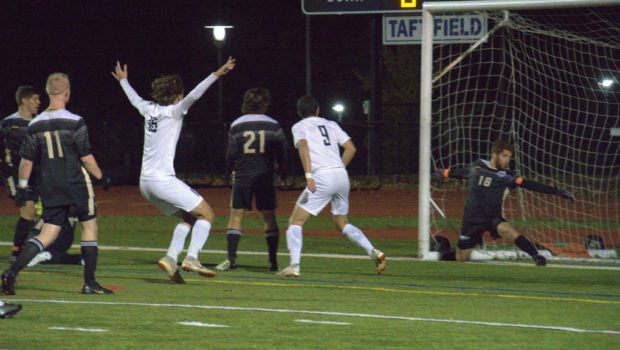 They’d knocked off #3 Danbury in the quarterfinal. They were playing quickly and well. Their training sessions were intense and productive.

Their foe — #2 Trumbull — was the same team they’d battled back against early in the season, turning a 2-0 deficit into a 2-2 draw. And the Eagles — defending FCIAC champs — had eliminated the Wreckers in penalty kicks in this same semifinal round a year earlier. A novelist could not have created a better script.

Just 7 minutes in, they struck. Patricio Perez Elorza drilled an excellent corner kick into the box. Benny Feuer — the defender who comes forward on set pieces — headed strongly home. It was his 3rd goal in 4 games.

Feuer, Carter Bassler, Brendan Lynch and Surya Balaji combined for great team defense in the 11th minute. At the other end, George Smith nearly pounced on a defensive mistake. In the 20th minute, a second corner kick nearly connected.

But 3 minutes later, an inadvertent hand ball during a straight-out-of-training defensive block gave Trumbull a free kick directly in front of the goal, just outside the box. Justin Horvath drilled it perfectly over the wall.

The goal energized the Eagles. They began winning more balls, and pushed forward more than before. Ten minutes before halftime, they scored again — again, off a free kick. The ball bounced around in the box this time, before it was banged in.

The tide turned again. With 3 minutes left before intermission, Alan Fiore sent Evan Birns in alone. The keeper made an excellent save.

The blue-and-whites retained their confidence at halftime. But a quick counterattack 3 minutes in ended with Matthew Bagley’s long shot looping over keeper Reed Caney.

Down 2 goals with 38 minutes remaining, Staples pushed forward. But that left them open defensively. Caney made 2 superb stops. But a 71st minute goal from Tiago Frazao iced the win.

It was a bitter defeat for the Wreckers. For the 2nd year in a row, they fell in the semis — to the same team.

The first two “seasons” — regular, and FCIAC tournament — are over. Now the Westporters set their sights on the 3rd season, and the biggest prize of all: the state tournament.

Pairings will be announced Friday. The first game of the 3rd season is next Monday. FINAL SCORE: Trumbull 4, Staples 1. SEASON RECORD: 9-5-4. Benny Feuer scored. He’s not in the photo — but Brendan Lynch and Evan Birns are. (Photo/Christina Bassler) Josh DeDomenico gives it his all. (Photo/Christina Bassler)