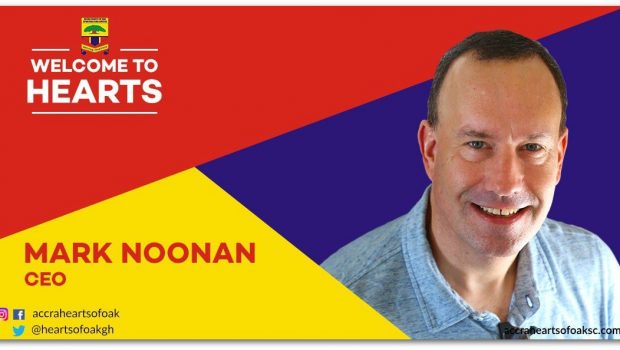 On his way to close a land deal for his soccer club’s new training ground, Mark Noonan was loaded down. He had two bottles of peppermint schnapps and a case of beer. He carried two canvas bags filled with cash. And delivery of the deal’s final asset, a cow, was set for later. All were part of a routine transaction in Ghana.

Noonan, an American soccer and marketing executive, spent an eventful year in Ghana as the CEO of Hearts of Oak, the soccer-mad nation’s oldest and best supported club. Over 10 million people consider themselves fans of the country’s 20-time champions, nicknamed “The Phobians” because of the fear they strike in their opponents.

The training ground acquisition — consummated by several slugs from the schnapps bottle for each dignitary in attendance, along with traditional prayers and blessings, then more pulls from the bottle — “was the most interesting deal I’ve ever done,” Noonan said recently.

He made several other major commercial impacts on Hearts of Oak’s business during his short stint in Western Africa. But he ultimately stepped away from his great Ghanaian adventure for several reasons, some of which he’ll explain publicly, and others that he won’t. Chief among them were the corruption and lack of professionalization in the country’s soccer ecosystem.

A chance connection on LinkedIn in 2017 led Noonan to a seat at a table across from Togbe Afede XIV, Hearts of Oak’s owner and one of the most powerful and wealthy tribal leaders in Ghana. The pair hit it off during a three-plus hour dinner at a midtown Manhattan hotel, and Afede suggested Noonan, whose experience includes running his own sports and entertainment agency (Focal Sports) and serving as CMO for U.S. Soccer, come to Ghana to run his club. Afede wasn’t kidding.

Both of Noonan’s daughters were in college and he and his wife, Katie, were empty nesters. After 20 years living in the New York area, “It was a time in our life where we could do something really interesting and make ourselves really uncomfortable, which is how you learn,” Noonan said.

By February 2018, Noonan and Katie were in Accra, the capital city of Ghana. Noonan’s curiosity about Ghana was reciprocated.

“When his announcement was made and his CV and job experience was published, the whole Ghanaian football family was shocked as well as excited,” said Ghanaian journalist Saddick Adams. “The questions were, ‘How could such a top figure choose to come down here to work?’ and ‘What could have motivated him to make this choice?’”

Several cultural differences were immediately apparent. English is the official language of Ghana, but more than 250 languages and dialects are spoken there. Whenever businessmen didn’t want Noonan to know what they were saying, they seamlessly switched into one of the local dialects.

“Adapting to Ghanaian business is a challenge” and takes a long time, said Tom Vernon, an Englishman who runs a soccer academy in the country. “In a high pressure environment like Hearts of Oak, this is even more challenging.”

It wasn’t easy for Noonan to blend in either. His Caucasian skin made him a minority for the first time in his life, and his job made him a near-instant celebrity. Noonan quickly realized that anything he did, whether public or private, was watched, oftentimes by Ghanaian paparazzi.

“It was an amazing experience, knowing your every move was being watched,” he said. “At times, it was a huge pain in the ass.”

News coverage of Noonan was largely positive, though. He quickly realized he would need to adapt to Ghanaian culture, not the other way around, and that helped him make a positive early impression after reaching an agreement for the training ground and landing the club an Umbro kit deal.

Noonan hired a technical director, Kim Grant, and tried, with the help of a 20-year-old American intern, Arik Rosenstein, to take a census of Hearts of Oak fans living in Ghana. Noonan also led a successful rebrand of the club, partnering with United Kingdom-based company teamup, led by Fred Popp, to redesign Hearts of Oak’s colorful but dated crest into a more modern and succinct mark. The revamp was well-received by the rabid fan base.

“You’re taking an identity of a team that is so historic, so storied that it’s affected so many people,” said Rosenstein, an NYU student who spent the fall semester of 2018 in Ghana working under Noonan. “As someone from America, you’re trying to respectfully rebrand. That’s a tough balance, and Mark did it excellently in my opinion.”

Noonan’s momentum abruptly ended when a documentary called “No. 12” aired to huge Accra crowds in mid-2018 and left Ghanaian soccer in ruins. Using undercover cameras, a team of investigative journalists filmed over 150 soccer referees and high-level soccer officials accepting bribes, including Kwesi Nyantakyi, the head of Ghanaian football. He was caught on film piling a $65,000 bribe into a black plastic bag.

Many viewed Nyantakyi as a future leader of the African confederation, CAF. Instead, FIFA banned him from soccer for life in October 2018, a shocking result in a country where bribery and skimming off the top pervades many aspects of daily life.

The president of Ghana, Nana Akufo-Addo, suspended the country’s top league, the national team and, with FIFA’s support, commenced a program to restart the sport from a blank slate. Noonan was named to a national committee tasked with overseeing the project.

With the league canceled for the year, Noonan faced a fight to keep his club afloat. He says with pride that Hearts of Oak was the only Ghanaian club that didn’t miss a payroll during the scandal and subsequent rebuild, which greatly strained the country’s financially weak soccer structure. The Ghana Premier League lay dormant for nearly 600 days, only recently recommencing league play in late December.

‘Nobody gives you a playbook’

The job stress continually built and the death of youth player Moro Dungu didn’t help Noonan’s state of mind. Dungu was a teenage soccer player on the verge of breaking into Hearts of Oak’s first team. He and Noonan developed a friendship, and Noonan and his wife decided to invite Dungu and several other youth team players to their apartment for an American Thanksgiving dinner in 2018. Dungu died that morning from an enlarged heart.

“This was a kid that was supposed to be sitting at my Thanksgiving dinner table,” said Noonan, who hosted the three other teens in his apartment that night so they could grieve together. “Nobody prepares you for it, nobody gives you a playbook.”

When Noonan signed his three-year deal with Hearts of Oak in 2018, he insisted on including a one-year opt-out clause. In February 2019, Noonan decided to exercise the option and quietly told his boss, Afede.

In addition to the litany of obstacles in his daily work, living in the developing world had taken a toll on him and his wife and they missed American life. Ghanaian people were open-hearted and fun-loving and the country was fairly safe. But improving the club was nearly impossible during the soccer impasse.

On Feb. 10, Noonan and Afede ate dinner with the Hearts of Oak team at Afede’s house. A few hours later, Noonan sat on a plane flying back to America.

■ Currently: Noonan is busy with several advisory roles, some of which are in soccer and all of which are in the sports industry. He’s also helping the city of Denver’s bid to win hosting rights for 2026 World Cup matches.

Hearts of Oak administrators, players and even Noonan’s personal driver were unaware of Noonan’s departure, and it would be a few more weeks before it was clear that he wasn’t returning. He was told to keep his exit quiet to avoid destabilizing the club.

“On hindsight, it is a club known for reckless sacking of coaches and managing directors,” said Adams. “Many have left the club under controversial and shocking circumstances, and Noonan’s exit is not an exception. No clear reasons were given for his departure.”

Noonan blamed factors that “were mostly bigger than a football club.”

“The reason why I went over there was to take a club and fulfill the promise of Ghana football,” he said. “I thought the conditions existed — we had a very powerful, well-financed owner, we had one of the most historic clubs not just in Ghana but in Africa, with a rabid fan base — I felt if we put the right systems and infrastructure around it, I thought we could not only win Africa, but be an incredibly successful financial club.”

Noonan couldn’t say goodbye personally to any of the people he had grown close to during his time at the club. But he still keeps in touch with many of them through messaging apps.

“There are some things we have to change and I think Mark was going in the right direction but it was a frustrating time for all of us in Ghana,” Vernon said in a WhatsApp message. “Poor timing. I think he will be back one day.”

Vernon ended his message with a winking emoji.