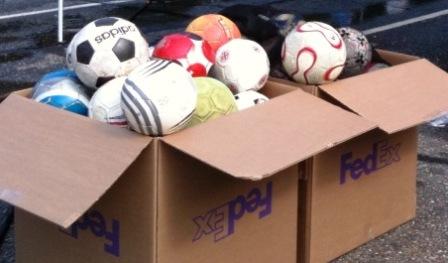 Kick For Nick is an important international aid organization, with roots next door.

Founded in memory of Nick Madaras — a former Wilton High School soccer player, youth coach and referee killed in 2006 while serving in Iraq — it builds on his desire to deliver soccer balls in children in need.

In the years since, over 50,000 balls have been distributed. Initially they were given out by US troops in Iraq; the network now includes military contractors, volunteers, individuals, schools and non-profits. They’ve been distributed to underprivileged children in more than 50 countries, from Afghanistan, Syria and Lebanon to Bhutan, Guatemala and Colombia.

This Friday (October 18), he’ll have collection boxes in the cafeteria. Quiz Night attendees can bring soccer apparel, balls, guards, shoes and bags — new or used — for any age group. Evan will make sure it gets to Kick for Nick, for distribution.

He’s so passionate about the project, he’ll even personally pick up donations from people who cannot be at Quiz Night. Email evanbirns2020@gmail.com to arrange a pickup.

Staples Soccer proudly supports our senior forward in this great cause.