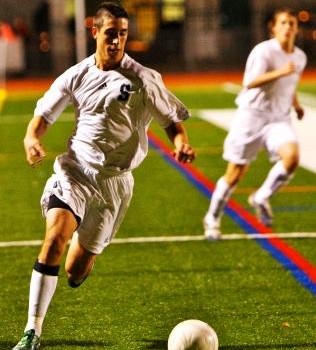 Jack was the 1st Westport runner overall, and the highest finisher for the Hole in the Wall Gang Camp team — which included 6 other Staples soccer players.

That gave Jack the win in this month’s Octathlon of Champions event. It also vaulted him into 1st place overall, with 64 points. Foster Goldberg — who came in 114th in the 5K (22:50) — trials Jack by just 3 points (61). Two Octo events remain.

The 5K drew entrants from 32 states and 10 countries. The Wrecker soccer players were part of the Team Hole in the Wall Gang Camp, raising funds for the very worthy camp that provides exceptional experiences for children with cancer.

“It was a great showing, by a group of very committed young men,” said Staples head coach Dan Woog. “And when it was over, some of them went off to play matches for their club teams. They’re setting a strong standard as we start getting ready for the fall season.”

Goalkeeper Noah Schwaeber and his father Wayne — a former player.

One Response to Jack Scott Wins 5K Octathlon, 8th Overall Out Of 1,355; Wrecker Runners Raise $$ For Hole In Wall Gang