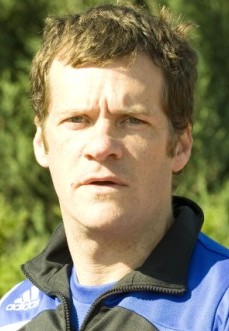 Amos Magee grew up in Minnesota.  The first he heard of Staples was at Wesleyan University, where his teammates on one of the Cardinals’ best teams ever were Peter “Ox” Doolittle ’88 and Ty Jagerson ’88.

Ox and Ty made sure Amos spent plenty of time in Westport.  He was a fixture in short-goal summer games, and returned for alumni events.  Through his friendships with players like Jem Sollinger ’88 and Jon Walker ’88, Amos became an honorary Staples Wrecker.

His marriage Saturday night made the New York Times. The long story described how Amos — who, after a long professional playing career, is now assistant coach of the new MLS Portland Timbers, while completing a master’s in public administration — met Charlotte Tuttle, who has a master’s in performance theory and is studying for a Ph.D. in applied economics.

To read all the details of Amos and Charlotte’s flirting amid cats, click here.