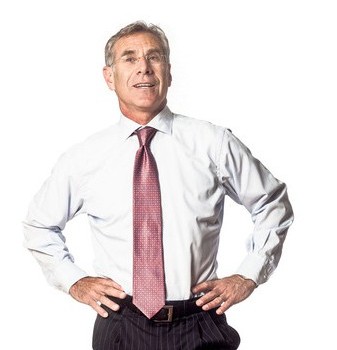 George Barrett ’73 — the former Staples and Brown University star — was the subject of a recent “CEO Spotlight” in Barron’s, the prestigious financial magazine.

While much of the long story focused on George’s success as CEO of Cardinal Health — a Fortune 25 healthcare company — a substantial section was devoted to his intriguing background.

Energetic and fit, Barrett sat down with Barron’s in a conference room at the company’s Dublin, Ohio, headquarters over a lunch of green salad. No sodas, and no sweets for dessert. And that was no accident. While Cardinal’s business is built around treating diseases with increasingly low-cost medicines, Barrett knows the real key to cutting health-care spending is to treat the problem before it becomes a problem: “The starting point is the really devastating effect of obesity and smoking on public health.”

The CEO of the country’s second-largest drug distributor— McKesson (MCK) is marginally bigger—is neither a doctor nor an engineer. Barrett, in fact, earned an undergraduate degree in music and history from Brown University in 1977. And after an audition, he was invited to study with a voice coach who worked with New York’s Metropolitan Opera.

Barrett’s predisposition to the arts—he’s also an accomplished pianist, guitarist, and French-horn player—comes naturally. His mother is a published poet and former teacher and his father was a psychologist. Nobody in his family worked in business, so it was never really on his radar screen.

A varsity soccer player at Brown, he followed his passions after college, teaching and coaching at two of New York’s private schools by day while pursuing a music career at night. Soon, he started landing folk-rock gigs around town—but something seemed to be missing.

“I realized, about two and a half years into this, that while I loved being onstage and I loved being in the recording studio and I loved the music, everything else about the business I didn’t like,” he says. “I didn’t like turning day into night, night into day.” Nor did he care for the pay—it didn’t cover his rent.

It was then that his fiance’s father steered him into business, working for a small dermatology-related firm.

“I really enjoyed the variety of it and how fast I was getting a chance to learn,” Barrett says, recalling that he moved between regulatory affairs, sales, and manufacturing, among other responsibilities. Eight years later, after earning an M.B.A. from New York University in his spare time, he was running the firm.