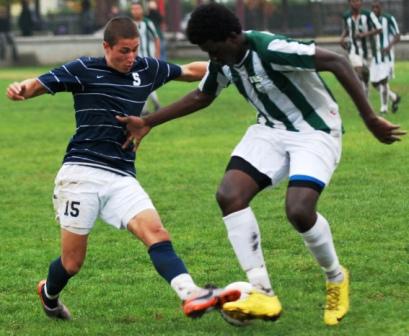 Frankie Bergonzi ’11’s 1st collegiate point was a big one. The defender’s 55th-minute flick-on of a corner kick led to a header goal. That was the only scoring, as Colgate edged reigning Patriot League champion 1-0.

The Raiders are just 2-7 — but because this was the 1st league match for both sides, they sit atop the standings.

Bergonzi is the team leader in minutes played. He has started all 9 contests, and has sat for just 4 minutes overall. He — and former teammate James Hickok ’13 — look forward to an excellent match on October 22, when Colgate hosts Dartmouth.