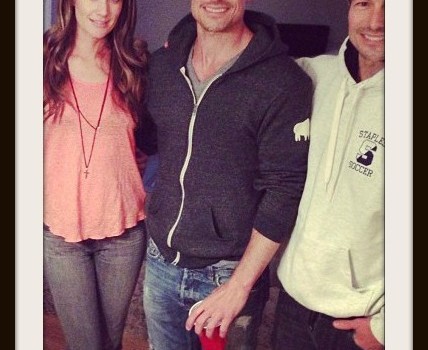 Drew Riker ’88 and his twin brother Derek Riker ’88 have had a great life after Staples soccer.

As supermodels they’ve posed with Cindy Crawford, for the lenses of Bruce Weber and Herb Ritts, and for clients like Abercrombie & Fitch, Armani and Revlon.

The twins made a close run on “The Amazing Race.” Derek — for whom Ben Stiller named his famous character Derek Zoolander — married Miss Illinois USA.

Now, as very talented celebrity photographers themselves, they hang with an A-list crowd. Just the other day, out in LA, they were with model and TV star (“Ugly Betty,” “CSI”) Amanda Lockwood.

From the photo below, it looks like they were having a great time. And — like proud Staples players everywhere — Drew was lookin’ good in his Staples logowear.