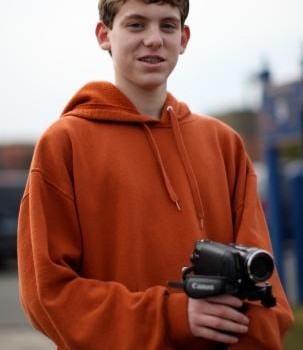 Check Out All Our Videos At Once

2009 was notable for many things.  For example, the Staples Wreckers won their 12th state championship.

And StaplesSoccer.com joined the video age.

Sam Bender — the man behind the camera

Sam Bender’s great highlight films provided week-by-week entertainment all season long.  But did you know  there’s 1 spot (besides a YouTube “Staples Soccer channel” subscription) where you can find all those videos, and more?

Just click on the “video” tab at the top of the StaplesSoccer.com home page.  You’ll find links to all of Sam’s highlight films; the Bird’s Eye Sports preview of the entire LL state championship match film;  Greg Gudis’s stunning strike against Glastonbury; Dave Ruden’s post-game interviews with Andrew McNair and Alan Reiter; the entire penalty kick shootout versus Newtown; the pre-season highlight trailer, and the video that started it all:  Brendan Lesch’s bicycle kick goal in the Wethersfield scrimmage.

One Response to Check Out All Our Videos At Once