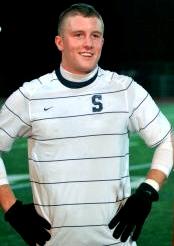 Notre-Dame bound midfielder Brendan Lesch is the 7th All-American in Staples boys soccer history — and the 1st of the 21st century.

The senior tri-captain was 1 of only 3 Connecticut players chosen by the National Soccer Coaches Association of America committee.  He will join Kevin Michalak of Farmington High School and Tyler Leeman of Montville High at the All-America banquet in Baltimore next month.

Lesch was also selected to the All-New England and All-State squads — as he was last year.  He is the 11th All-New England choice from Staples — but only the 2nd to repeat.  Mark Noonan turned the trick in 1981-’82.

For a complete list of all Staples post-season honors through the years, go to the StaplesSoccer.com home page and click the “Stuff” tab at the top — or click here.