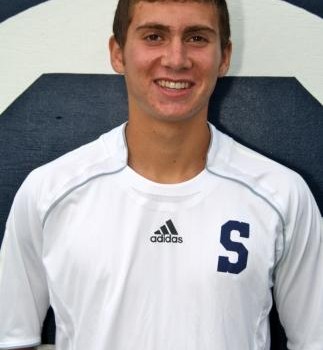 Fans who watched the Staples soccer team this year knew they had a great midfield.  Now the rest of the state officially agrees.

Senior quad-captain Alan Reiter and junior Brendan Lesch have been named to the All-State team, as selected by the Connecticut Soccer Coaches Association.  The duo were chosen based on their high rankings by FCIAC coaches.

Reiter, who was named an All-State player last year, is Staples’ 1st repeat selection since Ross McGibney in 2004 and ’05.  Lesch is a 1st-time choice.

This is the 1st time the Wreckers have had 2 CSCA All-State picks in the same year since 1989, when Chris Mitchell (1st team) and Alex Deegan (2nd team) were chosen.  Now there is only 1 squad.

“To have 2 players chosen is quite an honor,” said head coach Dan Woog.  “To have 2 central midfielders chosen is outstanding.  It’s a position that requires talent, toughness, intelligence, poise, vision, intelligence, creativity and passion.  Alan and Brendan play very different styles, but both possess all those qualities.  I am happy for them, and proud of them.”