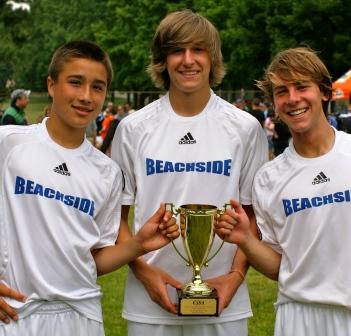 McCarthy (goalkeeper) and Reiter (midfielder) are members of Beachside‘s U-18 team that edged Newtown Samba 2-1 in the Connecticut Junior Soccer Association state cup finals this morning at Newington High School.  In addition to a tough opponent, McCarthy and Reiter overcame the obstacle of the senior prom last night.

Liu, Malowitz and McNair will join McCarthy and Reiter next month at the US Youth Soccer Region I championship, in West Virginia.  The 3 sophomores are members of Beachside’s U-15 team that downed FSA United 1-0.  Liu and Malowitz started on defense, and helped key the shutout.  McNair — also a defender — is out following hip surgery.

This is the 3rd straight state cup title for the Westport trio.

Also on Beachside:  Tim Frassetto of Trumbull.  He is the son of Don Frassetto ’77.

Another Westporter — Graham Gudis — also heads to the Mountain State next month.  His U-12 Beachside squad overcame an early red card to defeat FSA 2-1.