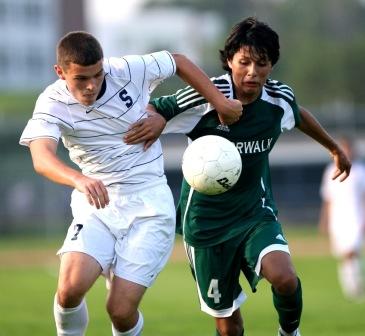 The Staples team has been awarded the Southern Connecticut Soccer Officials’ Jack Mullady Sportsmanship Award for 2011.  The announcement was made by referee Joe D’Ascania, president of the organization, which serves FCIAC and SWC teams in much of Fairfield County.

The decision was based on the season-long commitment to fair play by Wrecker players and coaches.  In addition, Staples accumulated only 5 cards during the regular season and FCIAC playoffs.

“This is a huge honor,” said head coach Dan Woog.  “Some people think sportsmanship awards are given as consolation prizes to winless teams.  This shows that teams can play hard and well and fair, and honor the game.  I am very proud that the officials have recognized Staples this year.”

Woog, and co-captains Jake Malowitz and James Hickok, will receive the award at a ceremony in New Canaan on November 10.

Soccer is a physical game, as Terence Gibbons knows — and not easy to officiate. (Photo by Carl McNair)