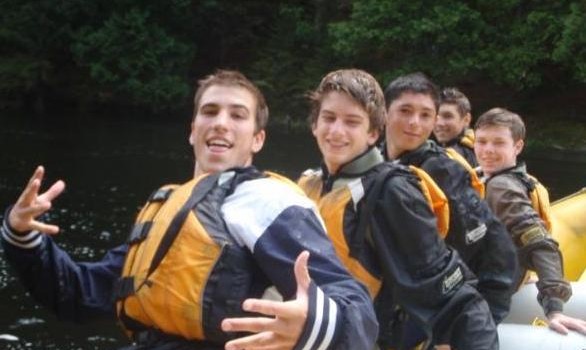 Each year, the returning varsity players take a pre-season trip.  It’s not about soccer; it’s about being together as a team, sharing experiences, having fun, and tightening the bonds that are so important for a successful year.

This year’s destination was the Kennebec River in Maine.  With Mike Smith ’08 as chaperone, and James Scott ’03 — a former soccer player and volleyball star — as river guide and outdoor guru, 9 Wreckers spent 4 action-packed days at the fantastic Northern Outdoors center in The Forks (18 miles north of Bingham, as the logging truck drives).

The team rafted Class 4 rapids on the river, did a high ropes adventure course, slept in tents in the woods, built campfires, ate well — and got ready for the exciting season that begins later this month.

Greg Gudis kicks it in his kayak.

Mike Smith and James Hickok help each other on the ropes course.

The challenge: Get everyone from one end of the ropes course to the other — with a full water bucket. Brendan Lesch and Sean Gallagher lead the way.

Mikey Scott swings from the trees.