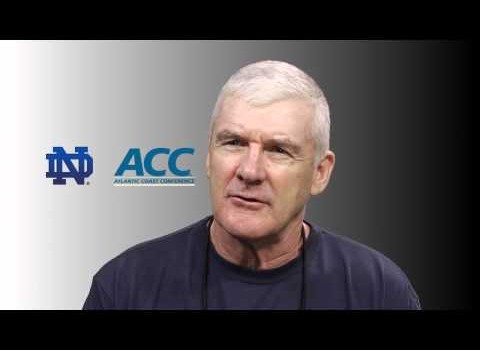 When Notre Dame won the NCAA Division I College Cup on Sunday, the soccer world was thrilled. Head coach Bobby Clark is one of the most popular figures in the game — here and abroad — and at last the 68-year-old won a national championship.

Nowhere was the praise louder than from 3 former Staples soccer players. Two played for Clark when he coached Dartmouth College.

Brendan Lesch ’11 is currently on the team that won the national title, 2-1 over Maryland. Lesch missed this season with an injury, but was on the bench for the final.

“He’s very even-keeled,” Lesch said. “He places a high premium on professionalism, taking care of business on the field.”

Clark is indeed a true professional. The Scottish national team keeper for 17 years, he was head coach of the New Zealand national team. He also coached in Zimbabwe and Scotland.

“This could not happen to a more deserving individual,” said Chris Mitchell ’91. “Coach Clark has dedicated his life to college soccer.”

Mitchell cited Clark’s 3 priorities: 1st is family, 2nd is academics, 3rd is soccer. At Dartmouth, the coach was proud that his soccer squad had the highest GPA of any team on campus.

Mitchell added that many players considered him their “2nd dad. He would have us over to his house with his wife Betty on weekends. It was a special relationship I will always cherish.”

While Clark’s knowledge of the game is “amazing,” Mitchell said he never looked for personal accolades. “He cared most about the team, and its character and reputation.” Even when he’d casually mention playing against Brazil in the World Cup, Clark put the comment in the context of the team.

Clark instilled confidence in Mitchell. One day, when the striker was injured, he told his coach he did not think he could make it through the next match. “Big Man, I need you,” Clark replied. “You hurt is better than my next man who is fit and ready to go.”

“Needless to say, I went out there and played through the pain,” Mitchell laughed. “We won 4-0. He made me WANT to play hard for him.”

But Mitchell’s favorite story involves a recruiting trip Clark made to the Midwest. He was trying to land the best player in the country. When Mitchell and several teammates, including current Georgetown coach Brian Weise, asked if the player was coming to Hanover, Clark said quietly, “I don’t think he fits on my team.”

Mitchell says, “It took us a while to understand what he really meant. Bobby explained that this young man was arrogant, selfish and not a team player. Wow — talk about integrity and standing for what you believe in! Bobby would turn down the chance to get the best player in the country because he would not jeopardize his team.

“That’s the true spirit of Bobby Clark. He cares, he always does the right thing — it is always about his TEAM.”

“He is a true educator,” Sollinger says. “He cares about you as a student, a player, but most of all as a person.”

“Practices were structured, but insanely fun and real competitive,” the former player notes. “We really went at it. Everyone got better — technically, tactically and mentally. We always ended with a game. There was no special treatment for anyone. Everyone earned their spot. And we all worked for each other, for ourselves and for Coach.”

In the last game of his freshman season, playing Columbia in the snow in Hanover, Dartmouth was down 1-0. The Big Green senior center midfielder was struggling, and Clark told Sollinger to warm up. He was all set to go in when the midfielder made a bad pass. It was quickly intercepted — by none other than Kurt Dasbach — and suddenly Dartmouth was down 2-0.

Clark told Sollinger to sit down. He would not pull a senior in his final match after a mistake. “I got it,” Sollinger says. “Coach Clark taught me some incredible life lessons.”

“Whenever the weather was nasty — and it was often tough in Hanover in late fall — Coach came bouncing into the locker room before practice. He’d say in his Scottish accent, ‘What a great day for football!’ He loves what he does.”

Congratulations, Coach Bobby Clark, on your national championship, from your former Wrecker players — and the entire Staples boys soccer program.