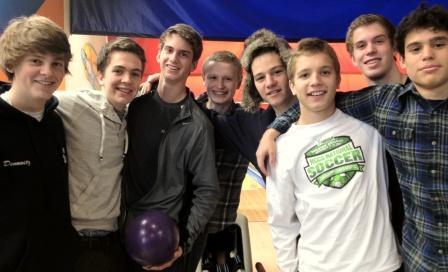 The Wreckers kicked off the 1st-ever Octathlon of Champions — an 8-month, 8-event competition — today with bowling.

The Octathlon — open to all returning varsity players, as well as juniors on last fall’s JV team — features a different event every month. Each competition is designed by a different junior. Upcoming events include a 5K race, paintball and fishing.

Walker Marsh was in charge of bowling. He chose the venue (Rip Van Winkle Lanes), and designed the format (2-man teams; 3 games each) and points system (awarded for the team with the highest total score and runner-up team, plus individuals with the highest game and most strikes).

Ryan Petersen was the big winner. He and James Hickok amassed the highest 3-game score (632); Ryan also had the highest individual game (120) and most strikes (7).

Finishing 2nd were the team of Walker Marsh and Jon Denowitz.

With players receiving 1 point for competing, the totals after 1 event are: