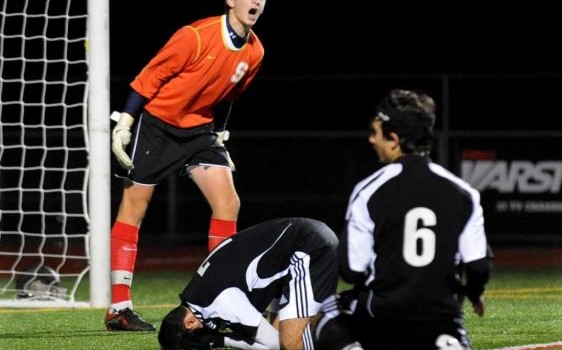 The 2012 Staples boys soccer schedule has been announced, and posted online. Highlights include 6 night games — including matches at powerhouses Ridgefield, Norwalk and Trumbull — and key home contests against Greenwich, Westhill, Darien and New Canaan.

After pre-season scrimmages with Newtown, Wethersfield, Glastonbury and 1st-time foe Fairfield Prep, the Wreckers open at home on Tuesday, September 11 against Harding.

The slate includes a very tough 4-games-in-10-days stretch versus Norwalk, Trumbull, Greenwich and Darien. The regular season concludes on Wednesday, October 24 at Danbury.

Staples plays 16 FCIAC matches — the maximum allowed by the CIAC. Because there are 19 league teams, each team misses 2 foes. This year, those opponents are Stamford and Bassick.

“We’ve got our work cut out for us,” says head coach Dan Woog. “This is the FCIAC — it’s tough for everyone. But I have full confidence that when the gun goes off in September, our guys will be ready.”

The junior varsity and freshman schedules are also posted. To view all the schedules, click here (or use the “This Season” tab at the top of StaplesSoccer.com); then scroll down.

6 regular season night games are on tap for the Staples varsity this fall. (Photo/Christian Abraham for CT Post)