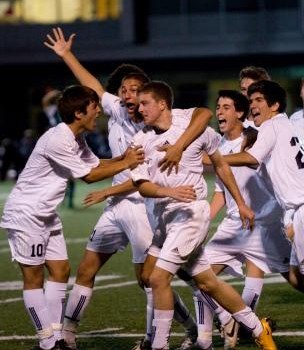 With recent schedule changes, more than half of this fall’s 10 Staples boys soccer away matches will be played at night.

Brookfield (Saturday, October 10, 6 p.m.) had previously been scheduled for after dark.

“It’ll be fun,” said Staples head coach Dan Woog.  “Night matches let plenty of fans see our games who otherwise couldn’t.  There’s a special atmosphere — and because so many post-season games are at night, it’s a good way to prepare.

“We’ll be traveling a lot this year, but we’ll be going to some great spots.  Danbury and McMahon recently upgraded their facilities.  Norwalk’s got nice new turf, and because we’re so close and such rivals, that game will definitely pack them in.  And Tiger Hollow in Ridgefield is a very classy stadium.”

“Of course,” Woog added, “there’s no place like The Hill.”

(For a complete schedule — including varsity and junior varsity — click on the “This Season” tab at the top of the www.StaplesSoccer.com home page.) Fairfield Ludlowe High School — under the lights — was the site for last fall's FCIAC semifinals. A large and boisterous crowd cheered the Wreckers on to victory.