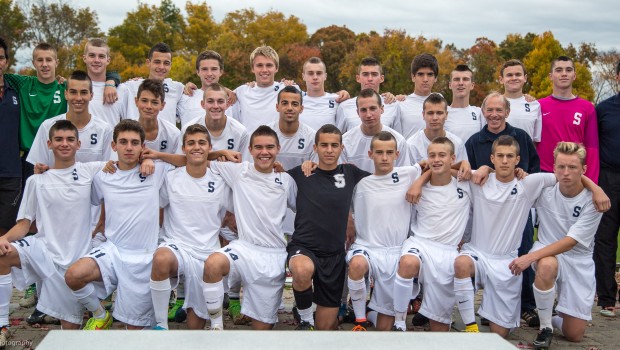 Very occasionally, he talks about soccer. Dan’s November 21 piece did just that.

Here’s his look back at the 2014 Staples varsity soccer team:

The team I coach fell two games short of our goal. Each year, we strive to win our final match of the year. Like nearly every good team — that is, teams good enough to qualify for the state tournament — many years we get beaten somewhere along the way.

But what a run we had.

After a slow start, our guys caught fire. Bad luck and weird circumstances (including a night-game power outage) caused us to play an almost-inhuman eight games in 14 days — and three in just 48 hours. It was wild. It was crazy. It was the adventure our players looked forward to from the first time they became aware of the power of Staples soccer.

Then the real fun began. In the FCIAC quarterfinals we scored the only two goals of the game a minute apart — with less than 10 minutes remaining — to upset No.2 -seeded Danbury. Greenwich took our measure in the semifinals, but we moved confidently into the state tournament that began a few days later.

First we knocked off higher-ranked East Hartford, away, with a solid 3-0 victory. Then came a storybook match at No. 3-in-the-state West Haven. Down 3-1 with only 15 minutes to play, we scored an improbable three straight goals. The game-winner came with just 84 seconds left. That 4-3 victory will go down in the annals of Staples soccer, if not the entire state tournament.

We ran out of gas two days later. Darien won 2-0, ending the 2014 Wreckers’ hopes and dreams. It was a crushing end, and it left most players in tears.

But this column is not about the games themselves, the shutouts we administered and suffered, the scores and standings. It’s about the experience of playing high school sports, and the indelible mark that leaves on those who do.

Much ink has been spilled about the decision three years ago by US Soccer — the national governing body — to institute an “academy” program for elite players. These boys — at the Under-16 and Under-18 age levels originally, and now at the Under-14 “pre-academy” level — are prohibited from playing high school soccer.

The upsides are strong competition, and a chance to train and play with the top players in a region. The downsides are extensive travel (up to 80 miles each way, several times a week); significant expenses (only a few academy players are subsidized), and the loss of an opportunity to play with friends and longtime teammates, for one’s school and community.

That last downside seems abstract, and perhaps insignificant. But any athlete who just spent the past three months battling with and for the Staples soccer team and the past year, two or three preparing for this season — could say it is the most significant reason of all.

The highs of this past season were some of the highest I’ve experienced in my coaching career. The bus ride home from West Haven was insane. Our players’ pride in what they’d accomplished — with the eyes of the states’s soccer fans on them — was matched only by their disbelief in what had transpired in those final 15 minutes.

The lows, meanwhile, were the lowest I’ve ever felt. We gave away a few matches this year — through inexperience, lack of focus and just bad luck — and those losses cut to the bone. The aftermath of those games — the soul-searching, the self-recriminations, the knowledge that those opportunities were gone forever — was brutal.

The sobs after the final Darien loss were wrenching. For our seven seniors in particular, the sense of finality was stunning. I make my living with words, but I had none to comfort them.

The 26 varsity soccer players learned many important lessons this year. They learned what it means to commit fully to a long-range goal. They learned how hard it is to try to reach that goal; how long it takes, and how elusive a goal can be. They learned that soccer can be a cruel game, and that the ball does not always bounce the right way.

They also learned that spending several hours each day — at training sessions, on buses, at pasta dinners, in each other’s basements, at Qdoba (the unofficial post-game hangout) — is meaningful and good. They learned that nine sophomores, 10 juniors and seven seniors can form bonds that transcend other friend groups and interests. They learned that it’s OK to kick each other’s butts in training, and hug each other before and after every game.

They learned that sometimes the journey is more important than the destination. They learned about life.

And, through high school soccer, they got an education they could never receive in a so-called “soccer academy.”

(For a direct link to the column, click here.)