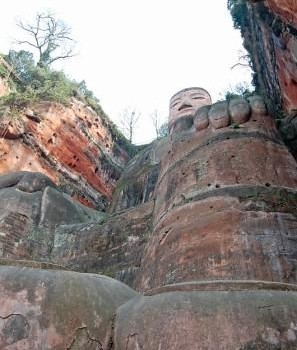 The former tri-captain and junior varsity coach is still enjoying his year abroad — and, while teaching, learning something new every day.

Here is his latest report:

Since last being in touch I hope you have recovered from a wonderful holiday season. Here in China the big holiday is the Spring Festival, which occurs after the 12-unar month comes to a close.  This year the date falls on February 14th, so Chinese will be eating chocolate truffles along with the typical festival dishes.

Spring Festival brings a nice long break from work.  After 2 weeks of being on the opposite end of the examination process (trust me, this is a lose-lose situation) it is a great need.

Already a week into the trip, I’ve since headed to 2 southern Chinese provinces.  First was Sichuan, which is best known to the Western world for its Kong Pao chicken, the 2008 earthquake, and Giant Panda bears.  Within China, Sichuan is known for beautiful scenery, beautiful women and beautiful food (this is a literal translation).

The scenery was indeed eye-catching, including a trip to Leshan where the largest standing Buddha (240 feet) looks out over a river basin.  It was an impressive sight indeed, and I did my best to shake the big guy’s mammoth hand.

The women were an interesting breed as well, and the downtown area even had a fashion center to check out.  Shiny down vests, trucker caps with English writing, and glittered glasses without lenses are just of the few “in things” noticed — go figure.  As to the “beautiful food,” I must say that despite enjoying the fine cuisine I would hardly describe a violently spicy hotpot as being anything but beautiful.  Something beautiful usually doesn’t make you hiccup for 5 minutes and nearly bring you to tears!

In Chengdu I met another English teacher from America with an interesting story.  Jeff, the recent graduate student in Sweden and former investment banker from Colorodo, was on a similar travel plan and schedule in Sichuan, and had the same intention to head south to Yunnan — a place the Chinese call “eternal spring.”  We decided to take a 22-hour train to the capital of Kunming, and what an adventure that turned out to be!

Because we had the bottom “communal” beds we had a good chance to get to know everyone. with the best of our communication and language abilities.  In the open bunk of 6 with us were 2 people from a separate minority group of China (Yi), 2 businessmen from the area, 1 guy who said nothing but snored the whole time, and no one who spoke a word of English other than Jeff and me.

A good portion of the ride was spent speaking to a lady of the Yi ethnicity.  We actually communicated quite well because our Mandarin is both at the level of a 3-year old!  She was kind enough to teach the basics or her language (mom-ama, dad-ada, thank you-ka sa sa, etc.), and I ended up teaching the alphabet.

You may notice that including the 2 of us foreigners, I listed 7 people. This is because the 2 Yi ladies bought 1 sleeper bed ticket and 1 sitting ticket between them.  They continuously changed postions throughout the 22-hour journey.

Finally we made it to Yunnan, a province where I currently am, and I must admit that winters are a great time to be here (75-degree highs, 60 in the evening.  Everywhere lies a background of snowcapped mountains and a striking blue sky.

After parting ways with our new friends (everyone was overly friendly and curious about 2 foreigners), we headed to a youth hostel.  En route  we met a fellow traveler looking for the same destination.  This is how Silk, the full-time traveler, part-time tutor and former hydroponics practicioner from Korea became part of our 3- person traveling group.

The following day we enjoyed a trip out to Shilin stone forest, a labirynth of stalagmite-like rocks that stretch over acres and acres of land and reach at least 2 stories in the sky.  The most fun was finding peculiar shapes within the stone — the states of Maine and South Carolina were recognized, along with a cat, rabbit and the outline of Australia.

Next on the tour was Dali, which was called by another American traveler the “Chinese Santa Fe,”  for a colorful historic town sandwiched between a wall of mountains and a picturesque lake.  Unintentionally I arrived during the 2010 China Flower Exhibition, which had the city covered in rose bushes, camelias, orchards and magnolias.

There was also ample opportunity to get to know the local ethnic minority of Bai people, and see their vibrant way of life. A trip to the local park especially revealed the close relationship the oldest and youngest generations enjoy, seen throughout the province.  There were a few incidents further in the countryside when small children pointed to us and said to their mother, “na shuh shen ma” (“what is that!’), followed by a good chuckle from their parents or grandparents, and us foreigners.

Next on the stop was Lijiang, once a sleepy city hidden in the Himalayas but now a thriving tourist destination. The change came after a devastating earthquake in the early ’90s, and the visit of many relief workers.  It attracted much attention from the outside. The visitors were so impressed with the scenery and the many different cultures living in harmony that enough support was gathered to declare it a UNESCO World Heritage Site.  Since then the city was completely renovated into a historic tourist destination.

Only 1 day was spent in the town, before flying out and touring a little of Southeast Asia.  I’ll update you on that trip later.  The final end of the trip is a long-anticipated visit from my amazing grandparents and dear mum, and a visit to Hong Kong, Hangzhou and Shanghai.  Surely, more good stories to come! Hopefully you can update me on some of your happenings too — it’s great to hear from good people!  My email is rovertlamb@gmail.com.

As always…wishing you the best! –Trevor

PS:  Of course there are photos (over 1,100 from this trip alone).  Click here for the first leg of Sichuan, and here for Yunnan — enjoy.