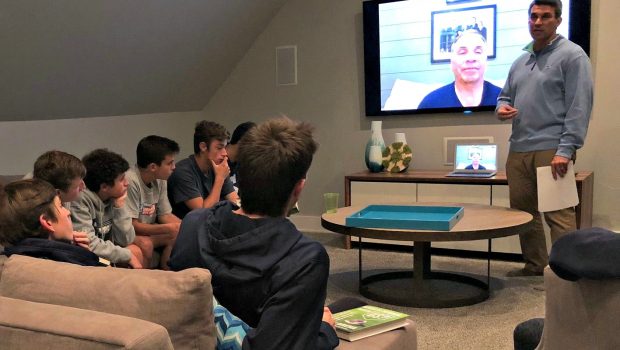 Tom Henske — for 11 years a fixture of Staples soccer, working in areas from goalkeepers to goal-setting, and video to training — has retired as assistant coach. The Long Island native, former youth national team player and 3-time national champion at the University of Virginia cited the demands of his work with a New York wealth management firm.

After 11 years of an amazing coaching experience, it is time to say goodbye. As many of you know I have a professional wealth management practice which is at a critical juncture. My company will require my undivided focus throughout the entire year. Saying this decision was “bittersweet” would be the understatement of the decade.

Throughout the years, the players have taught me to love the sport again. I hadn’t been around a soccer ball until about 15 years after I graduated from college soccer. I literally shut that part of my life off. But thanks to Staples soccer, I got a big part of my life back. I realized what I could give to the players who annually came through our system had very little to do with soccer, but everything to do with the life lessons that soccer gives us.

The players I worked with inspired me to strive toward a better version of myself. I grew tremendously during my coaching tenure. Our players demanded of me what I demanded of them: effort, passion, and striving to be the best that we can be. And in holding each other accountable, we all grew to heights we never would have attained by ourselves. Truly an example of 1+1 equaling a whole lot more than 2.

As I said at the banquet, “There is no one, other than their parents, who will love these boys more than we do.” It is true and while I won’t be on the sideline coaching next season, it’s safe for me to say that it would be humanly impossible for anyone to be a bigger fan of Staples soccer than I am. That should mean a lot from someone who didn’t attend the high school or play for the program. I feel that level of gratitude for this amazing program. Dan, Kurt and Jim all share that same passion. It’s been an honor to work alongside them, learn from them, and become close friends. That is a coaching staff I’d be proud to have my own children play for.

Thank you for letting me be part of Staples soccer for three months every year. It’s been an honor.

A chance meeting with Tom Henske 12 years ago turned into an incredible gift for the Staples High School soccer program.

It took a year for Tom to join us. As soon as he got started, however, that turned into a typical Tom Henske commitment. He was all in.

For over a decade Tom has given his heart and soul to Staples soccer. He has helped players set personal and team goals. He has taught them soccer – but he has done much more than that. He has given them a road map to be successful in life: in work, in relationships, in their communities.

Tom has had a profound influence on Staples soccer, and on me personally. He has been much more than a colleague. He has been a great friend, a trusted advisor, and someone who I always knew had the best interests of Staples soccer at heart.

Tom set very high standards: for the players, our coaching staff, and himself. Then he challenged all of us to meet them. I will miss his selfless dedication to our program, his total embrace of it, and 11 years of highs and lows, laughter and tears, on and off the field.

Tom has left us with a strong foundation. As I said at the banquet, our Staples soccer parents give their sons two gifts: roots and wings. Tom has certainly done both, for 11 years’ worth of players.

I hope you’ll join me in thanking Tom for all he has done for Staples soccer, and wishing him all the best in the years to come.