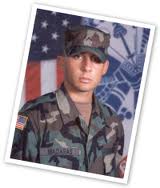 Each year, a Staples High School student is asked to speak at Westport’s Veterans Day ceremony.

In a town like this — where the military is an afterthought, if thought of at all — finding an appropriate, articulate high school senior is no easy task.

But for 2 years in a row, the keynote speaker has been a Staples soccer player.

Last year’s address was given by Sean Gallagher, currently a plebe at the US Naval Academy.  This year the speaker was another defender:  Taylor McNair.

In the fall of 2006, while on leave from Iraq, Private First Class Nick Madaras rounded up as many soccer balls as he could find to bring back for his 2nd tour of duty.  His plan was to distribute the balls to the Iraqi children he had watched day after day.

Unfortunately, he never got the chance.  Nick was killed by an IED shortly after returning to Baqubah, Iraq.

Just weeks after hearing of his death, a fellow Wilton citizen and Korean War veteran contacted the Madaras family in hopes of maintaining Nicks’ legacy and, more important, fulfilling Nick’s desire to do good.  From this, the “Kick for Nick” organization was born:  an initiative based in Wilton that collects and ships balls to children in Iraq and Afghanistan, for distribution by US soldiers.

I never had the pleasure of meeting Nick.  I did, however, have the pleasure of fulfilling his one wish.  Three years ago, when I was a freshman in high school, Staples soccer coach Dan Woog approached my older brother, then a senior, and asked if he would organize a “Kick for Nick” drive.

I remember sitting in my basement, deflating hundreds of soccer balls and inscribing “PFC Nick Madaras” on each one.  Yet it wasn’t until just recently, after meeting with Nick’s dad Bill to drop off the soccer balls from another successful drive this year, that I realized the power of those words.

I don’t know many veterans.  So when assistant principal Rich Franzis, an Iraq War veteran himself, asked if I would be interested in giving this speech today, I was honored yet hesitant.  My connection to this country’s servicemen and women was distant, to say the least.

I thought long and hard about the kind of sentiments a 17-year-old kid from Westport would have about Veterans Day.  My grandfathers and uncles didn’t fight in any wars; my friends have shown no interest in enlisting in the military. Yet my mind continued to bounce back to the recent “Kick for Nick drive.”  As it turns out, you don’t need to know a veteran to appreciate this special day.

And so I return to the power of those few words: a simple class rank, PFC, and the name of a fallen soldier, Nick Madaras.  Each and every ball a child receives is etched with this name, which serves as a constant reminder of what the United States military, of what you, have done for the world.  Each time a child touches a soccer ball, and his or her face glows with happiness, we can take pride in the fact that a U.S. soldier created that smile.

In 2008, ESPN did a story on PFC Nick Madaras.  Among the hundreds of comments on their web page, one stands out.  The commenter wrote, “I am a 53 year old US Coast Guard veteran, and when I watched this on ESPN I sat and cried for this beautiful family and this beautiful story. That story describes American soldiers so, so well.”

Nick Madaras sought to make his impact through the fundamental lesson of sharing.  Other soldiers have made their impact through acts of selflessness or gallantry.  The one thing I’ve discovered over these past few years, however, is that it doesn’t matter what kind of impact you made; rather, that you have made an impact at all.

Nick is like so many other veterans around the country. All of you, whether you know it or not, have gone above and beyond the call of duty in so many ways.  For Nick, this meant bringing happiness to the children he interacted with every day in a war-ravaged country.  For others of you, it might have been saving a fellow soldier’s life, or maybe putting your own life on the line to protect the fundamental principles of this nation.

For me, today is about appreciating that impact.

Servicemen and women are a unique group of people.  In almost every case you are heroic yet humble, altruistic but modest.  For generations, Americans have put the very foundation of our country, liberty, in your hands.  And for generations you have answered this call, and done so valiantly, with little recognition.

So today I know I speak for millions of other Americans when I say, thank you. Thank you Nick Madaras, for making this world a happier place by use of a simple soccer ball.

And thank you, all of you, for the often-intangible yet ever-present impacts you have made, not only in this town or this country, but in every corner of the world.

Dozens of flags in the Staples courtyard honored fallen soldiers yesterday. Each bore the name of a fallen soldier from the area — including Wilfredo Perez of Norwalk (above), and Nick Madaras.

Click below to view Taylor McNair’s speech, as broadcast on the “Good Morning Staples” TV show.  Taylor begins speaking at the 2:20 mark.