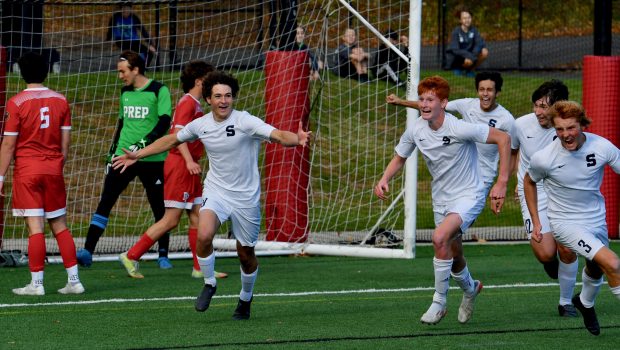 They’ve faced giants like Glastonbury and Hall. They’ve met powerhouses that are no longer in Class LL, like Wethersfield, Guilford and E.O. Smith. They’ve played schools that no longer exist, like R.C. Lee. Their list of state tournament foes spans A (Amity) to (almost) Z (Xavier).

Yet in 6 decades of competition, they never, ever played a school less than 5 miles away: Fairfield Prep.

This afternoon’s first-ever official match was not the first time the teams played, though. They’ve scrimmaged each other in preseason for the past several years. This year — in late August —  he Wreckers won 6-0 at Rafferty Stadium.

But that was an outlier. The Jesuits roared through the regular season 13-2-1. That snagged them the #3 seed in the state tournament — and a home match against #6 (10-1-4 regular season) Staples.

Both teams knew this would not be another 6-0 romp. The visitors were focused on their “Prep prep.” They had a game plan — a combination of their play-it-out-of-the-back style, and defense against the host’s tendencies.

The Wreckers followed the plan well, but not perfectly, throughout the scoreless first half. They earned 2 quick corner kicks, but no one crashed the box on the keeper’s first bobble. Staples had a slight edge in first half possession, with Dylan Hoke and Ryan Thomas winning balls to solidify midfield. But Prep got players through. The Wreckers stepped the back line of Jackson Hochhauser, Bruno Guiduli, Caleb Tobias and Hunter Smith up, catching them offsides, and was equal to the task.

Tobias had a particularly active day. He went both ways with abandon, locking down defensively, initiating offensive attacks, and adding a long through on the right to complement Smith’s on the left.

Just 48 hours earlier, the blue-and-whites were deadlocked at halftime. They probed patiently, securing a 1-0 win over Conard with a Hochhauser goal off a Jaden Mueller corner kick.

Once again, the Wreckers were poised and controlled. Once again, they scored on a corner kick — something they work on in training often.

This one was delivered in the 51st minute. Matthew Jordan earned it, then took it. Reese Watkins — Staples’ leading scorer — power-headed it in perfectly.

The goal came a minute after Staples had dodged a bullet. Superb defense by Guiduli halted the Prepsters’ most dangerous threat so far.

They threatened again 3 minutes after Watkins’ strike. Keeper Jacob Greenberger made a tip save over the top on a rocket.

Jordan countered with his own blast soon after.

As the Jesuits chased the game, the Wreckers took command. The back 4 — augmented by Jack Foster — was in control, staying together and coolly working the ball out of danger. Tim Liakh continued to make an enormous impact, as he’d done coming off the bench in the first half. Offensive work by Murilo Moreno and Will Adams — plus a 70th-minute sharp shot by Thomas — kept the Jesuits from committing fully to the attack.

A sliding save by Greenberger in the 73rd minute snuffed Prep’s last real attempt.

The well-earned — and hard-earned — victory vaults Staples into the semifinals for the first time since 2010. In that wild match, they beat Hall-West Hartford 8-2. Seeking their 2nd straight state championship 3 days later, they lost 2-1 to Farmington, on a blistering free kick. Coincidentally, Hall and Farmington met tonight in the quarterfinal match that determined the Wreckers’ next opponent. Farmington equalized late, then won on penalty kicks. The semifinal will be played Tuesday, Wednesday or Thursday, at a neutral site still to be determined. FINAL SCORE: Staples 1, Fairfield Prep 0. SEASON RECORD: 13-1-4.

QUICK KICKS: Head coach Dan Woog called this “another classic state tournament match. 1-0 matches like these build character and confidence. Our guys are getting tournament-tested, and they’re reacting exactly the way a senior-dominated team should. They understand what it takes to persevere and advance. But they’re also having plenty of fun. It’s a great balance.” … and the celebration (Photo/Mark Sikorski) Caleb Tobias had another excellent match, on both sides of the ball. (Photo/Mark Sikorski) Tim Liakh provided a spark off the bench. (Photo/Mark Sikorski)