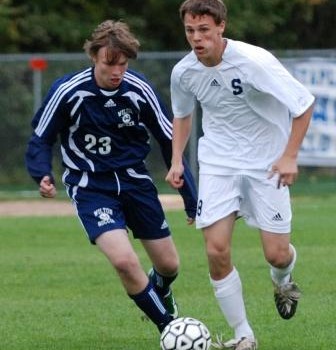 The Warriors started slowly this year.  But they arrived at Loeffler Field fresh off a huge 1-0 upset of previously unbeaten Ridgefield, just 48 hours earlier.

A match like that — a fight to the finish — can take a lot out of a team.  Though they threatened a few times in the 1st half, Wilton did not have the punch they possessed on Monday.  Still, the halftime score was only 1-0.  Staples’ goal came off Mikey Scott’s throw-in.  Alan Reiter nailed it — giving him 3 straight scores, including the last 2 on Monday.

The Wreckers opened the game up after intermission.  Matteo Marzoli, playing solidly at central midfield, sprung Mike White forward 8 minutes in.  White put on a couple of nifty moves, then finished solidly to double his side’s lead.

Mindful of the big match coming up Friday night in Ridgefield, Staples rested many starters for much of the 2nd half.  There was no letup in touch or intensity.  Justin Hawrysh and Nate Greenberg worked hard up front; Jake Krosse and Jason Bennett led the midfield — and then Nick Cion ripped a grass-cutter just inside the post, to the crowd and his teammates’ delight.  Court Lake assisted.

QUICK KICKS: Connor Walsh made his varsity debut — but because the goalkeeper is still suffering from a broken wrist, he came on as a field player.  Walsh wowed the crowd with some fine offensive moves….

The freshmen handed Wilton their 1st defeat of the season, by a 3-1 count.  The second half was particularly strong.  Jeff Krieger, Harry Birch and Joe Greenwald all scored.  Coach Chris O’Dell cited Krieger for his good play, and Greenwald for “carrying the team, with great heart.”

3 Responses to Staples vs. Wilton