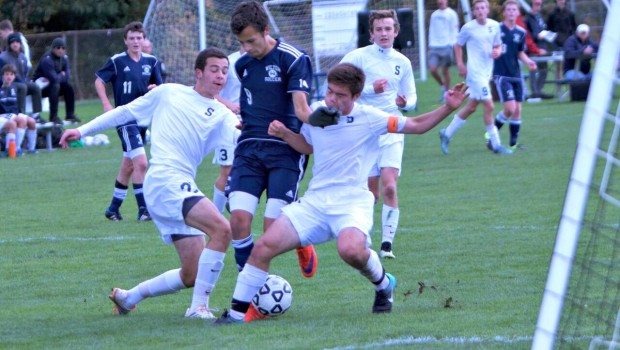 Everyone knew today’s match would be a great one.

This was the 3rd year in a row that Staples and Wilton battled on a Saturday afternoon at Loeffler Field, with a lot on the line. The 7-3-2 Warriors stood a point ahead of the 6-1-4 Wreckers (who have a game in hand). Players on both sides know each other, from club soccer.

The Westporters had something to prove. After 3 unsatisfying draws in a row, they were ready for a strong performance.

They got it. Working the ball on the ground as well as they had since their 3-0 rainy-day win over Fairfield Ludlowe, they dominated much of the 1st half. An enthusiastic crowd saw Staples link together plenty of good passes, moving the ball smartly across the field. Jack Zeldes was a dynamo at midfield, complementing Daniel Reid who opened up both sides of the field with vision and touch.

Daniel Perez Elorza and Spencer Daniels applied constant pressure up top. In the back, Kenji Goto was his usual clinical self in the middle, aided by Josh Berman. Flank play came from Teddy Lawrence, Matteo Broccolo, Graham Gudis and Aidan Wisher.

But the Wreckers had their hands full with Wilton’s talented center back, Patrick Prinner. He commanded his defense, roaming far to cut off most threats.

Three Staples corners in the 1st 10 minutes set the tone for the 1st half. (They had 9 on the day, to Wilton’s 4. Their best chance off a corner came late in the 1st half, on a Berman header from Wisher.) So did a number of offsides calls against the visitors

Yet not until 3:30 remained before intermission did the hosts find the net. The play began with Broccolo — the right back — pressuring near the Warriors’ penalty area, on the left side. (He’d come over for a long throw.) He won the ball off the foot of a defender, cut inside and rifled a shot. It was saved, and bounced out to Perez Elorza. He shot, but the ball was blocked by a teammate. It rebounded out to Daniels, who finally finished. It was a scrappy goal — but a well-earned one.

The 2nd half began with Wilton pressing. Jack Brandt knotted the score 3:30 in, on a bouncing ball off a defensive mis-clear. The guests had the run of play for the next 10 or 15 minutes, but Staples continued to threaten. One of the best chances came from a Perez Elorza run, but he was called offside.

With 9 minutes to play, the Wreckers had a golden opportunity. Gudis sent Wisher in on the keeper; the shot was saved.

Three minutes after that, Staples gave the Warriors their 4th corner of the day. The wind — which had favored the Wreckers in the 1st half, Wilton in the 2nd — suddenly shifted. It now blew across the field, in the Jack Brandt took the corner. He may or may not have been shooting — but the wind caught it, the ball arced perfectly for him, and nestled high into the far netting. It was a gorgeous goal — if you were a Wilton fan.

Staples came back with poise and pressure, but the Warriors were up to the task. They managed the game to the end, and left town with 3 points.

At the final whistle, the Wreckers were crushed. They certainly played well enough to win — yet they did not even draw. They lost.

Quickly, however, the feelings of heartbreak lessened. As the varsity sat on The Hill, watching the reserves play (quite well), they realized they’d played one of their best matches of the year. They’d given a hard, smart effort.

They were already excited about Monday’s match at Fairfield Warde (7 p.m.). The Mustangs are 8-2-4, and sit atop the entire FCIAC table. FINAL SCORE: Wilton 2, Staples 1. SEASON RECORD: 6-2-4.

QUICK KICKS: This was Staples’ 1st loss since opening day, over a month ago. On September 11 they fell to Trumbull 1-0….

The reserves came from behind twice to down Wilton 3-2. Danny Jersey scored on a rip; Rory Steele netted the 2nd, then Ian Weiler knocked in the rebound of a Kason Kreis shot….

The freshmen shut out Wilton 3-0. The 1st goal came from a counter, started by Jared Wainshal, continued by Wilson Daniels and finished by Nick Ambrose. Brad Cox got the next 2. Josh Zhang played excellent defense, while John Cordero had a strong game in goal. Matteo Broccolo focuses on the ball against Wilton. (Photo/MaryGrace Gudis) Graham Gudis has been a midfield force for Staples this year. (Photo/MaryGrace Gudis)