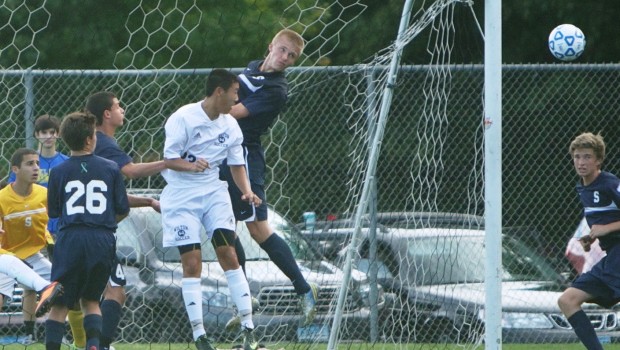 Last year’s Wilton game was disheartening. The Wreckers let a 2-0 halftime lead slip away, and fell 3-2 in front of a large Alumni Day crowd.

Both teams are different this year. They’ve been hit with injuries and Academy defections, but both have overcome adversity and sport solid records. The Warriors were 4-1-0 coming into today’s match; Staples, 4-1-1.

The Wreckers have always played well on Kristine Lilly Field. It’s big and wide, allowing creativity and movement. It’s turf, meaning the ball can be played to feet. With the sun shining, the environment this afternoon was perfect.

Staples welcomed back co-captain Jack Scott, after a concussion-induced 4 1/2-match absence. But the injury bug continued to bite. Co-captain Diego Alanis went out early with a rolled ankle, and did not return.

The Wreckers kept juggling their lineup — and whoever went in, wherever, contributed well. Charlie Leonard slipped back to the unfamiliar right back spot, and had a standout game. Nate Argosh and Andreas Bru came off the bench to provide firepower up top. Yousef Shahin played a couple of different positions with flair; Patrick Beusse and Daniel Perez Elorza worked the flanks, and James Lewis plugged the center in only his 2nd appearance of the year.

Besides lockdown defenders Leonard, Andrew Puchala, George Kokkalis and Kenji Goto, central midfielder Michael Reid was one of the few blue-and-whites to play the entire match at one spot. He ran the show with poise and determination, on both sides of the ball.

in the 20th minute Scott’s pressure produced a throw-in, which the keeper bobbled for a corner kick. Reid took it. Puchala tried to punch it in; it hit a body, and Scott pounded the rebound home.

Staples had a few more chances in the 1st half. Kokkalis headed a superb corner kick just high. Then, as the halftime horn blew, Argosh missed by inches.

Staples’ best chance came when Shahin’s free kick was saved off the crossbar by keeper Will DeSantis.

“This was one more gutsy, gritty win in a season filled with them,” said head coach Dan Woog. “We won our 1st match of the year 2-0; since then we’ve had 5 one-goal games, and a tie.

“Our guys are finding ways to score. They’re learning to hold leads. They’re understanding that it’s not about who plays where, but that our system works whoever is in there. It’s nail-biting, but it’s fun. We’re loving every second of this.” FINAL SCORE: Staples 1, Wilton. 0. Season record: 5-1-1.