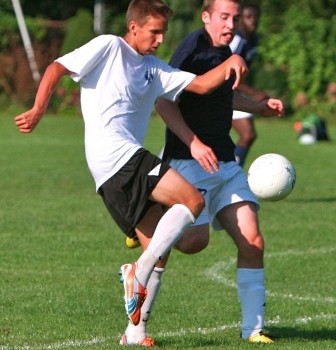 The Wreckers were supposed to open pre-season against Newtown, but because of Hurricane Irene, today was the 1st test.

Following tradition, Wethersfield made the long trip south on the Friday before Labor Day.  In the 1st 30-minute period, the Wreckers got goals from Terence Gibbons (off a stutter-step, following a ball from Jake Malowitz over the top), and Steve Smith (a blast, assisted by Alex Tonsberg).  James Hickok made 3 point-blank saves in goal.

The 2nd period saw the Eagles cash in after a defensive lunge.  David Hoffman tied the score, off a steal.  Keeper Tucker Rizzi added 1 excellent save.

In the final period, Diego Alanis’ rocket was negated by 2 Wethersfield strikes.  The final tally came in the waning seconds.

“It was a great 1st match-up,” head coach Dan Woog said.  “We got good looks at lots of guys.  Our early-season organization is not bad — and we saw plenty of things to work on in the days and weeks ahead.

“It was nice to see how much everyone enjoyed playing with everyone else.  That solid team spirit will take this group far.”