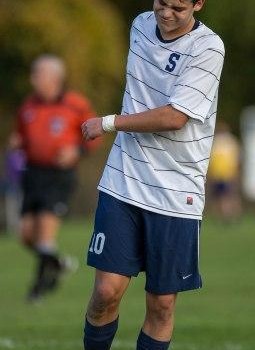 The Wreckers and Vikings have had some barn-burners in the past few years. There’s been plenty of goals, plenty of cards, plenty of emotion.

This year, both teams met at Loeffler Field clawing for FCIAC tournament berths. A win by the Westporters would eliminate the visitors.

Just 2 minutes in, freshman Joe Pravder won a 50-50 ball, and fed Jack Scott. His crossfield pass found Joe Greenwald, 25 yards out on the left side. The captain’s back was to the net, but he turned and fired. It was a gorgeous goal, and it looked like the floodgates would open.

Westhill drew level 9 minutes later, on one of the softest goals Staples has surrendered.

The Wreckers had a few chances before halftime, but Andrew Puchala’s header off Noah Bender’s corner kick was denied, as was Bender’s shot off a Harry Birch feed. Overall, it was an uncharacteristically listless 1st half for both sides.

After harsh words at halftime from the coaching staff, Staples woke up.

In the 43rd minute Jordan McNair’s pass to an overlapping Yousef Shahin was nearly slotted in.

A minute later McNair — who was always around the ball — won a hard tackle at midfield. He found Bender wide open on the left. Bender raced forward, then calmly beat the keeper near post.

It marked the 1st time this year the Westporters came back after conceding a goal. And it set the stage for more.

With Puchala and Ethan Bradeen holding the line defensively, Scott was able to work the right side. Birch covered lots of territory, and stellar service. Behind them, James Hickok barked instructions, and owned the box. The keeper was tested only once, and tipped a tough free kick over the bar.

In the 60th minute Greenwald laid off to McNair. He was fouled in the area. Diego Alanis — who pressured well all half — buried the penalty kick.

The insurance tally came 6 minutes from time. Sophomore Nate Argosh fielded Hickok’s long punt, and quickly found Pravder. He casually chipped the keeper — a fine finish both for him, and his team.

Head coach Dan Woog called the victory “very satisfying. We told the players the 1st half was not Staples soccer — but they already knew it. They stepped up big time in the 2nd half, and took a huge step forward. It was fantastic to see. We’re proud of them.

“They realize now what it takes to win a game like this. They can’t wait to keep it going on Monday against New Canaan.” FINAL SCORE: Staples 4, Westhill 1. SEASON RECORD: 9-4-1.

QUICK KICKS: Next up before New Canaan: Quiz Night (tomorrow — Friday — 7 p.m. in the cafeteria). Seats are still available: $25 at the door….

Noah Bender is not pleased, after missing a shot against Westhill. The senior midfielder later nailed the go-ahead goal, on a great shot. (Photo by Carl McNair)

Harry Birch covered plenty of territory against the Vikings, and was very strong on both sides of the ball. (Photo by Carl McNair)

The Wreckers’ defense gets upfield often. Ethan Bradeen, Andrew Puchala, Joe Greenwald and Jack Scott all were on the attack against Westhill. (Photo by Carl McNair)