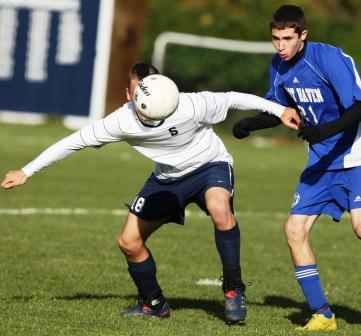 The wind howled at Loeffler Field today — but nothing like yesterday.  Gusts over 50 mph, coupled with snow, ice pellets, hail and rain forced a 24-hour postponement of the opening-round match with West Haven — and many other games in the state.

This afternoon was more like Wrecker tourney weather:  sunny and crisp.  That described Staples’ play in the opening minutes too.  They controlled the tempo, forcing the Blue Devils’ defense to retreat.  Having the wind at Staples’ backs did not hurt.

In the 15th minute, Jake Krosse unleashed a long free kick.  It landed directly at the feet of Greg Gudis.  The midfielder settled, waited patiently, touched to get the best angle, then blasted a shot directly over the keeper.

It took just 35 seconds for Staples to strike again.  Mikey Scott’s long throw created chaos in the West Haven box — so much that the ball was mis-headed into the net by a back.

Another Gudis shot, and more disruption off a Scott throw, nearly made it 3-0.  Then — less than 9 minutes after the Wreckers’ 1st tally — it was 3-0.

Once again, Scott’s throw was the catalyst.  This time it was defender Steven Denowitz who outleaped everyone else, and power-headed home.

Scott and Lorenz Esposito combined well, and almost got a 4th before halftime.

With the wind, the Westies hoped to change things around.  But Staples never let them back in the game.  AJ Green, Alex Tonsberg, Taylor McNair and Steve Smith came off the bench to pace the hosts — and a host of other Wreckers, including Dylan Hoy, Felipe Troncoso, Lars Aanestad, Will Meinke, Dylan Evans, Harry Birch and Ryan Armour, also contributed well.

Terence Gibbons — called up from JV, and making his varsity debut — excited the crowd with a powerful effort.

Steve Denowitz keeps his eye on the ball. How do we know it's him? The Mohawk (and the number). (Photo by Carl McNair)

Mikey Scott was sportin’ quite the headband today. (Photo by Carl McNair)

One Response to Staples vs. West Haven (State Tournament 1st Round)