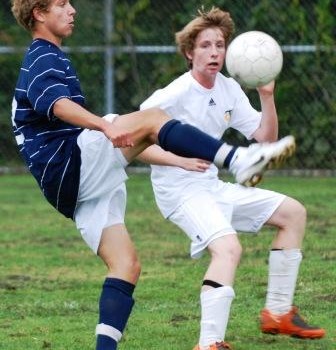 Due to a quirk of scheduling, Staples and Trinity Catholic had not met since 2006.  Kurt Dasbach — in his 7th year on the coaching staff — had never seen the Crusaders’ narrow field.

The hosts were coming off a very tough 2-1 defeat to Westhill on Monday.  But the Wreckers opened the scoring at 3:24.  Mike Scott sent Jake Malowitz forward on 1 of the 1st left-side overlaps of the year.  The defender earned his 1st assist, feeding Lorenz Esposito for a nice header.

All 10 field players who started were off the field by the 25th minute.

Nine minutes into the 2nd half Dylan Hoy sent AJ Green in, for a far corner rip.

Trinity’s Donovan McIntosh made it 6-1 in the 64th minute off a free kick — their lone shot of the day — but Taylor McNair got it back 4 minutes from time.  Alex Tonsberg set up his junior classmate.

QUICK KICKS:  The Wreckers’ next match should be a great one.  Undefeated (and defending state class L) champion Brookfield comes to town Saturday (3 p.m.). , for the 3rd-ever meeting in this excellent new rivalry.  The upstaters won 3-1 last year; Staples took the 1st game of the series 3-0….

Will Meinke works it against Trinity Catholic. (Photo by Lisa Krosse)

One Response to Staples vs. Trinity Catholic