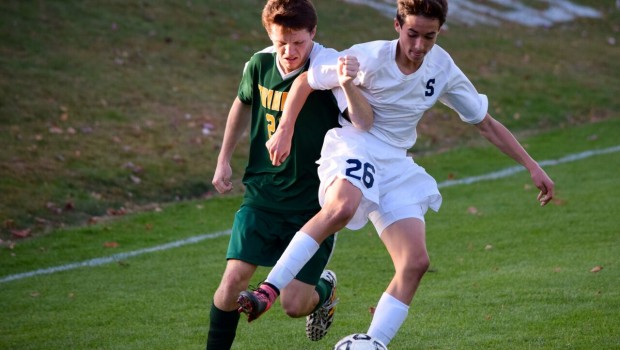 After a tough 5-game run — 3 disappointing draws, followed by 2 matches in which the Wreckers played their best soccer of the year, yet failed to earn a point — Staples needed a dynamic performance today.

But they also needed rest.

Facing their 3rd game in 5 days — with another on Friday against Stamford, and the regular season finale Monday night, both must-wins in order to qualify for the FCIAC tournament that begins 2 days later — the coaching staff made a decision. They’d sit 2 starters entirely, and give the others only 15 minutes at the start. After that, others — skillful and hungry for time — would take over.

Sometimes it takes a while to score in games like today. But Aidan Wisher made sure that didn’t happen. Just 49 seconds after the opening whistle he gathered a feed from Jack Zeldes, and slammed in a shot.

Wisher started the 2nd goal off, less than 3 minutes later. He hit Graham Gudis, who scored a rare — but excellent, and important — header goal.

Wisher had another rip — which was saved — before he and the starters gave way to the next wave. Anton Mahr led the offense, Matt Engler and Shane Dasbach took over midfield, and in the 32nd minute Matteo Broccolo netted his 1st-ever varsity goal off a Dasbach corner kick.

Dasbach then hit Timmy Liles, who roared forward. He laced a cross that Sam Kantor headed hard, for his 1st varsity goal, a minute before halftime.

The blue-and-whites poured in 4 more goals in the 2nd half. Just 2:22 after play resumed — Stephen Rowland toed in Rory Steele’s pass.

Three minutes later Kantor snagged his 2nd goal of the game, also on a header. The play began with a zinging cross from Liles.

Vaughan Picirillo-Sealey made his varsity debut at midfield, and performed well with fellow debutant Will Birch.

Andres Marmelo finished the scoring just 11 seconds from time, knocking in Griff O’Neill’s pass. And yes, it was Marmelo’s 1st varsity score too.

“We proved we could score early and late,” head coach Dan Woog said. “We needed a match like this — with strong, smart play from everyone on the field. We also needed to give some time off to guys who played 2 very intense matches. We will be rested and ready for Stamford on Friday — and for everything that lies ahead.” FINAL SCORE: Staples 8, Trinity Catholic 0. SEASON RECORD:  7-3-4.

QUICK KICKS:  The Wreckers’ 8 goals were the most since an 8-2 defeat of Hall in the state LL semifinals in 2010….

Staples outshot the Crusaders 23-5, and earned 5 corners to their 1. Noah Schwaeber and Brenden Price shared the shutout….

Ted Gallant — co-captain of the 1997 team — attended today’s match. It was his 1st time seeing the terrace — and the new school….

Today’s live tweeting duties were handled by Daniel Perez-Elorza, who was rested for the match.

The annual Quiz Night is this Friday (October 23), 7 p.m. in the Staples cafeteria. This year’s event features 2 auctions: silent and live. Timmy Liles mixes it up near the sideline. (Photo/Armelle Daniels) Griff O’Neill is a man on a mission. (Photo/Armelle Daniels)