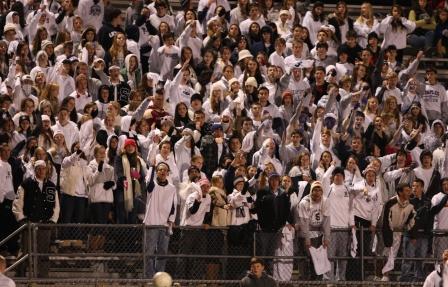 Less than 24 hours after defeating Fairfield Warde, the Wreckers took to Loeffler Field for a rescheduled (rainout) match against Trinity Catholic.

The Crusaders were in action yesterday too: a 6-0 loss to Darien.

Spectacular fall weather — sunny and crisp — and just-starting-to-turn leaves made for a perfect afternoon at Loeffler Field.

This was Staples’ 4th game in 6 days, and they showed a bit of the effects in the 1st half. Their short-passing game was fine; their finishing, though, was a bit off.

Still, they led 2-0 at intermission, on a strike by Joe Greenwald (from Jordan McNair) just 2:28 in, and a 24th-minute blast by Harry Birch (off a Greg Shikowitz feed).

The reserves came on in the 2nd half, and picked up the pace. In the 49th minute George Kokkalis and Patrick Beusse worked the ball to Ryan Petersen; he hit Noah Bender, for a 3-0 lead.

Seven minutes later Bender corralled a pass from Jon Denowitz, and it was 4-0.

In the 60th minute Bender earned a true hat trick — 3 consecutive goals — with an assist from Kokkalis.

Bender then assisted on Nate Argosh’s score. Argosh returned the favor in the 75th minute.

Head coach Dan Woog was pleased to see 26f shots. The visitors had only one (cleanly fielded by freshman keeper Noah Schwaeber).

“I like the attitude and mentality very much,” he said. “Our guys take it one game at a time. They’re getting 3 points here, 3 points there. It adds up. We’re asking a lot of them, and they’re responding very, very well.” FINAL SCORE: Staples 7, Trinity Catholic 0. SEASON RECORD: 7-3-1.

QUICK KICKS:  The Wreckers had 13 corner kicks, the Crusaders none….

Taylor McNair ’12 — on a break from Emory University — was at the match….

Varsity players lingered on the terrace after the Trinity Catholic match. It was a perfect afternoon for hanging out.

One Response to Staples vs. Trinity Catholic