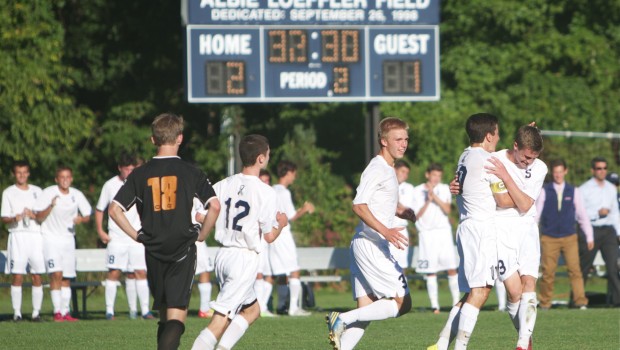 A year ago, Staples opened the season by squandering a 1-0 lead at Ridgefield. The Wreckers fell 2-1.

Two days ago, Staples was stunned 3-2 at Harding.

The blue-and-whites promised that today’s match at Loeffler Field would be different.

An intense training session yesterday, and a very focused warmup, seemed to bode well. But the Tigers — a consensus choice (with Greenwich) as one of the top 2 teams in the FCIAC this fall — drew first blood. An unmarked Adam Findlay headed home a driving corner kick just 5:10 into the match.

That emboldened the guests. They controlled the opening 20 minutes, using their height and speed to good avantage.

Energized, the Wreckers picked up after intermission right where they left off. Reid hit Patrick Beusse, who gained a corner kick. Almost immediately — in the 47th minute — the Westporters had another corner. Shahin took this one. The ball bounced wickedly for a while; Kokkalis headed it forward; it hit the post, then a couple of players, and wound up in the back of the net. For the 2nd match in a row, the Wreckers had come from behind.

The defensive four tightened up. Steven Sobel’s long throws added to the attack. Alanis’ 67th-minute bicycle kick almost worked — but the Tigers were not out of it.

A minute later, Staples keeper Noah Schwaeber — who made several good saves, in traffic — got his fingertips on a sharp cross from the left. But he redirected the ball to the foot of unmarked Ryan Meegan, whose easy tap-in drew his side level.

Both sides battled hard in the final 13 minutes. The ball skipped onto Alanis’ foot in the final minute, and only a fine save by keeper Nicholas Steer kept the Wreckers from recording a thrilling win.

The tie disappointed the Stapleites — and their large home crowd. The coaches were disappointed too. But they told their squad that they’d taken a big step forward today, against a very worthy opponent.

Last year’s Ridgefield loss was erased. So was Monday’s defeat. Now the Wreckers look ahead — with optimism and excitement — to the final 3/4 of the regular season. Next stop: St. Joseph on Saturday, at 4 p.m. FINAL SCORE: Staples 2, Ridgefield 2. SEASON RECORD: 2-1-1.

The junior varsity played a poor 1st half against Ridgefield. Only an excellent showing by keeper Ziggy Hallgarten kept the score 1-0. But the Wreckers came alive in the 2nd half, and went to war with the Tigers. Daniel Brill’s well-struck rebound with 20 minutes to play tied the match. Andrew Osorio contributed a great save, keeping the final scoreline 1-1. Coaches Seth Sholes and Brad Green were very pleased with the 2nd-half effort….

The freshmen fell behind 1-0, but 2nd-half goals earned them a 2-1 win. Rory Steele drew a penalty kick, then buried it for the equalizer. With 10 minutes to play, Josh Berman headed in Spencer Daniels’ corner kick for the victory. Coach Chris O’Dell cited his team’s excellent effort, including a 1st half kick save by keeper Thomas that kept the Wreckers close. Joe Pravder works his magic against the Tigers. (Photo/Kim Lake)