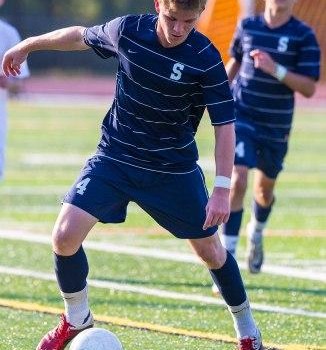 The Wreckers have had plenty of success at Tiger Hollow. This year Ridgefield’s stadium has new turf, slowing the game a bit.

The sun was blazing for today’s FCIAC opener between 2 teams that have been called league and state contenders. It was not, however, an epic contest.

Staples threatened first, Jack Scott sending Joe Greenwald in in the 1st minute. That didn’t pay off, but in the 6th minute Harry Birch’s long free kick did. Andrew Travers tucked it in for a quick 1-0 lead.

Travers almost struck again in the 13th minute, off Andrew Puchala’s direct kick. But that was it offensively for both sides, through the rest of the half.

Three minutes later, the Tigers drew level. Killian Clancy headed in, off a long throw across the goalmouth.

McNair powered through on a long ball, but the next goal was Ridgefield’s. It came 4 minutes after the 1st. A ball skittered across the goal mouth. No one reacted — except Liam Weir, who touched it in.

Neither team was connecting particularly well. The Tigers protected their lead, though Staples had chances. Keeper Calvin Dearth — who had a solid match — dropped Noah Bender’s shot, but no one was there to convert.

With 12 minutes to go Joe Pravder’s angled a shot that beat the keeper, but again Staples did not pounce.

And that was the game.

“We talked before the match about every game opening a door for us, or closing it,” said head coach Dan Woog. “This one we kind of closed on ourselves.” Final score: Ridgefield 2, Staples 1. Season record: 0-1-0.

The livestream of the game did not work. There was no internet signal in the woods at Tiger Hollow….

Ridgefield outshot Staples, 10-9. The Tigers had 4 corner kicks, the Wreckers 3….

The junior varsity fell behind 2-0 at Ridgefield on counters, but rallied for a 6-2 victory. Sterling Price tallied off a long throw by Steve Sobel. Second-half strikes came from Foster Goldberg, off a Sobel throw;  Andreas Bru’s 25-yeard free kick; Price, off a deflection after a failed clear from Sobel’s throw; Bru, off another Sobel throw, and Cameron Haber’s redirection off a shot by Mathias Henriksen. Bru, Sobel, Matt Bateman and Charlie Jersey played very well….

The freshmen opened with a 6-1, come-from-behind victory over Wilton. Jared Vishno’s 4 goals were sandwiched around tallies by Graham Gudis and Grant Sirlin. James Lewis was rock-solid at sweeper, while Kenji Goto and Ben Foster showed high energy.

The frosh then shut out Ridgefield 2-0. Vishno scored first; then Rees Chang nailed one into the upper 90. Goto and Lewis continued to look good; Carl Amacker had a strong 2nd half, and Noah Schwaeber excelled in goal….

Jordan McNair gets into it at Ridgefield. (Photo by Carl McNair)