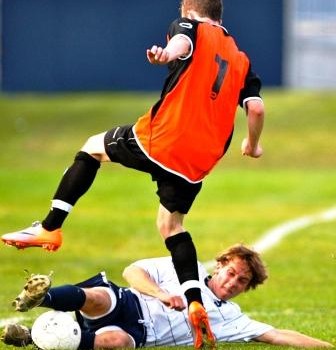 The Tigers came to town in 4th place in the FCIAC — just 2 spots below the Wreckers.  With towering defenders and a quick counterattack, the northerners have enjoyed a typically strong season.

Frankie Bergonzi roared out of the backfield in the opening minutes, setting a tone for the match.  Ridgefield employed their offside trap well, catching Staples several times, but in the 11th minute the Westporters got forward.

A Mikey Scott throw-in was saved over the line by keeper Matthew Knizeski.  Scott’s corner was nearly headed in by Bergonzi — it hit the post — but almost immediately Scott got another throw.

This time Greg Gudis ran through, powering in a great header for an early lead.

Three minutes after intermission, Gudis forced Knizeski into a dangerous bobble.  The score remained 1-0 — but not for long.

In the 45th minute Krosse and Lesch worked a nifty give-and-go.  Krosse took the return pass — a neat slot — then deposited a perfect shot low and in the corner.

Within 2 minutes it was 3-0.  Bergonzi flicked on Scott’s throw; Court Lake (who excelled at several different positions all day) was there to ram it home.

Scott gets an unofficial assist on that score.  Hoping to get more goals off his throws, he helped design several plays that the Wreckers trained in recent days.

Just as quickly, the hosts scored again.  Lesch laid off; Scott dummied; Jake Malowitz flicked on, and Lorenz Esposito headed high and long into the net.

That goal — Staples’ 3rd in a 5:29 span — almost finished off the Tigers.  Their best chance came in the 52nd minute, off a free kick.  But keeper James Hickok read it well, dove far to his right, and punched safely.

The Wrecker reserves continued to press.  Lars Aanestad hit Steve Smith; his great shot was saved well by the keeper.

Smith and Alex Tonsberg had excellent chances in a goalmouth scrum, while Dylan Hoy rifled a shot in the final minute.

“This is the best time of year,” said head coach Dan Woog.  “Our guys know how great it feels to win big matches like this.  And they know there are plenty of big matches ahead.”  Final score:  Staples 4, Ridgefield 0.  Season record:  12-2-1.

QUICK KICKS: The junior varsity rallied from a 1-0 halftime deficit to down Ridgefield 2-1.  Jay Kaplan nailed a penalty kick, while Terence Gibbons scored from the field.  Tucker Rizzi manned the nets in the 2nd half….

After being knocked on the head, Bergonzi returned to the field wearing a bright pink bandage.  He later took 3 stitches.

Jake Malowitz makes sure Ridgefield's Kevin Coleman does not get through. (Photo by Carl McNair)

One Response to Staples vs. Ridgefield