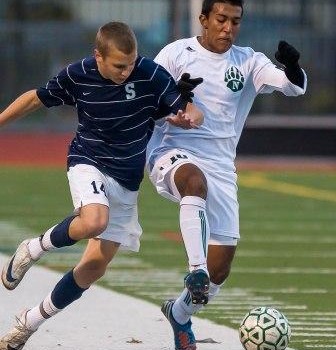 At 8:30 last night — just 2 hours after returning from their 6-0 state LL tournament 1st round win in Norwich — the Staples coaching staff held a telephone conference.

The subject: How to thwart Norwalk, the Wreckers’ 2nd-round opponents. Staples fell to the Bears 2-0 in the regular season on October 1, but the match was scoreless until 13 minutes remained.

Norwalk was now 17-1-1, #1 in the state — and ranked 7th in the nation. With a trio of offensive threats, a formidable defense and a fast-paced, ball-control style of play, the upcoming match would be a very tough one.

And it was set to kick off just 20 hours later.

Several veteran players joined the conference call. Soccer is a players’ game, it’s often said, and the Wrecker coaches have always encouraged their players to speak up.

For nearly an hour, the coaches and players discussed strategy. The coaches gave their athletes the green light. Now it was up to the players to make it work.

From the outset this afternoon at Testa Field, they did just that. With Birch and Puchala covering the center, Scott and Shahin winning balls and initiating attacks, Bradeen and Shikowitz pushing forward — and, behind them all, keeper James Hickok corraling high balls and launching counters — the blue-and-whites kept pace with their vaunted hosts.

Norwalk’s speed and talent was on full display. They are the quickest, tightest team the Wreckers have faced this year, by far. But Staples kept them from penetrating deeper than the Bears were used to.

It was a scintillating, back and forth affair. The Bears forced Staples to play quicker and better than they have all year, while the Wreckers pushed their foes to their limit too.

Neither side found an opening — until just 16:55 remained. Norwalk broke the deadlock on a play from the right side. The shot was low, hard — and true.

Staples went right back to work. They’d lost McNair — the sophomore sparkplug — to an injury just 4 minutes earlier. (Andrew Travers was out the entire game, with bronchitis).

They threw everything they had into the final minutes. But Norwalk proved impenetrable. There have already been upsets in the LL tournament — most notably, #4 Glastonbury falling to #29 Newington 3-2 — but this time the Wreckers fell agonizingly short.

“Words can’t describe how proud I am of this team,” head coach Dan Woog said as the lights went off at Testa Field.

“They fought like warriors today. It’s a cliche, but they really did leave everything on the field.

“More importantly, though, was the way they came together this year. Their spirit, their intensity, their team chemistry, their care and concern for every single teammate, their understanding of what it means to be a Staples soccer player — that made this one of the most enjoyable seasons I’ve ever experienced. And I don’t say that lightly.

“Led by 2 fantastic captains — James (Hickok) and Joe (Greenwald) — they learned how to battle. They learned how to pick each other up. And they learned something about themselves, and about life too. Every young man on this team is a champion in my book.” FINAL SCORE: Norwalk 1, Staples 0. FINAL RECORD: 11-6-2.

Each team also was shown 3 yellow cards. Woog called the match “hard fought and tenacious, but not malicious.” Soccer, he said, “is a contact sport.”…

Woog also wished Norwalk great success throughout the rest of the tournament. “I hope they win it all. They’re a superb, competitive team. We’ve had a fantastic rivalry with them. I have huge respect for their coaches and players. Plus, of course, they’re right next door.”…

Jack Scott goes shoulder to shoulder with Norwalk’s Santiago Muriel. It was one of many great individual battles, all day long. (Photo by Carl McNair)