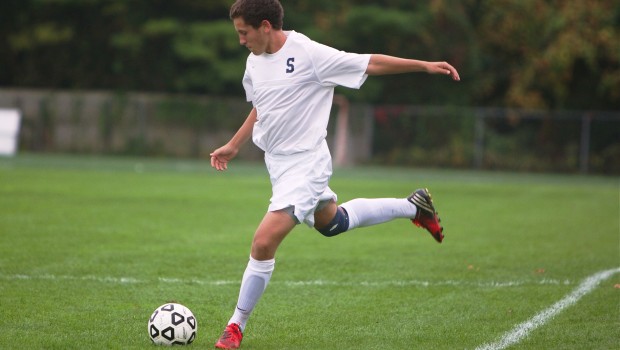 Today’s match had all the makings of another Staples-Norwalk classic.

The Wreckers had circled today’s meeting since last November — the day the eventual LL champion Bears knocked them out of the state tournament in a bitter 1-0 battle.

The Westporters have been on a roll — but so has Norwalk, after a slow start.

The Hill was packed. Even Staples’ Barbecue Club was out in force, grilling on the terrace.

The pressure paid off just 8 minutes in. Scott relentlessly rattled a midfielder, near the center circle. The co-captain snagged the ball, then drove forward — unmarked — to goal.

It’s not easy finishing a dead-on shot, and keeper Tyler Dalton parried the ball away. But Leonard crashed the box, and — in a textbook example of following up — met the rebound dead-on to slam it home.

It’s not as if Kokkalis and fellow backs Andrew Puchala, James Lewis and Kenji Goto had nothing to do. The Bears — particularly captain Jose Canahui — threatened several times. But defending as a pack worked, and keeper Noah Schwaeber — positioned well, with sure hands — made 2 fine stops.

Nate Argosh won a tackle, and almost made it 2-0 but was denied.

With 5 minutes left in the 1st half, Leonard rifled a great 1-time shot off Steven Sobel’s jinormous throw. Unfortunately, it was right at Dalton. Staples kept pressing, though, and in the waning seconds Scott’s hard work sprung Beusse free. The half ended 1-0.

The 2nd half began with Schwaeber grabbing a very difficult deflection.

Five minutes later Shahin put on a few fancy moves, then tore down the left sideline. Dalton gave a rebound, and Scott rammed it in — but the goal was waved off. The officials ruled that Dalton had possession before Scott’s shot.

Norwalk came back, and had the run of play for the next 15 minutes. Leonard had slid back on defense; slowly, he and his teammates regained control of territory and tempo.

With 5 minutes to play Argosh raced into the left corner. He cut the ball back, then delivered a great cross. Scott — positioned at the top of the box — met it dead-on. He buried a left-footed volley that long-time observers called one of the best goals ever at Loeffler Field.

From then on, it was lights out. Reid’s stunning tackle at midfield inspired his teammates. The Wreckers managed the game to the end, for a hard-fought, well-earned, and immensely satisfying victory.

QUICK KICKS: Staples outshot Norwalk 13-9. The Bears had 4 corner kicks, to the Wreckers’ 2….

One of today’s ballboys was Matt Stone. His father — Rob Stone ’83 — scored one of the most memorable goals in Wrecker history. The defender’s shot from near midfield with 7 minutes to play in the 1982 state championship gave Staples a 1-0 win over Ridgefield. Matt earned his own fame this summer, as a catcher on the Westport team that nearly won the Little League World Series. Matt is also a Westport Soccer Association travel player….

The junior varsity shut out Norwalk 4-0. Jack Zeldes headed in Aidan Wisher’s corner kick; Denzel Robinson knocked in Ethan Kobak’s cross; Zeldes beat 3 defenders in the box, then finished near post from a tough angle, and Andrew Osorio and Kobak fed Robinson for the final strike. Ziggy Hallgarten earned the shutout in goal, while Grant Sirlin looked strong as a flank midfielder…. Jack Scott (right) on a breakaway against Norwalk. Charlie Leonard (left) crashes the box — and scores on the rebound. (Photo/Kim Lake) Foster Goldberg returns to action against Norwalk. He was out for a month with a knee injury. (Photo/Kim Lake)