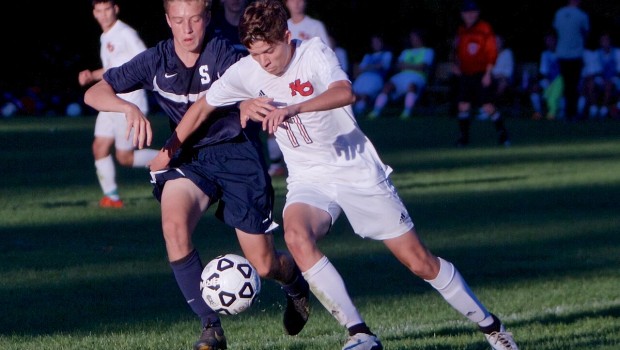 Since their 1st encounter in 1958, Staples has had New Canaan’s number. The Wreckers’ lifetime record against the Rams before today’s match was 50 wins, only 3 losses, and 14 ties.

Conner Field has been good to the Westporters too. They’ve won many important games there, including the 1982 state championship.

The grass was high today. The sky was bright blue. The leaves were turning. It was a great day to play.

But New Canaan seldom draws crowds, so the environment was quiet. And the 2 sides embarked on an unremarkable match. The hosts rely on a counterattack. Staples does best when playing the ball on the ground. But neither team got much momentum going. There were a few close encounters, but none of the goal kind. The blue-and-whites’ best chance came in the 61st minute, when Spencer Daniels’ header off Matteo Broccolo’s long throw was headed off the goal line.

Andres Marmelo got a start on defense, while Grant Sirlin offered steady play at midfield, and went forward hard and well. Kenji Goto was his usual tough self at central midfield. Brenden Price came on in goal in the 2nd half and kept Noah Schwaeber’s clean sheet.

“It’s frustrating,” admitted head coach Dan Woog of the Wreckers’ 3rd consecutive draw. “We are not coming close to the 4 principles of Staples soccer: always thinking offense, tenacious defense, seamless communication and outworking the other team. We know we can do it. We just haven’t been consistent enough, since Ludlowe (3-1 win).”

Staples has time now to regroup. The Wreckers are off until Saturday, when they host longtime rival Wilton (12 p.m.). FINAL SCORE: Staples 0, New Canaan 0. SEASON RECORD: 6-1-4

The reserves fell behind 1-0, but rallied for a 5-1 victory over New Canaan. Anton Mahr fed Shane Dasbach for the 1st goal; Jerrett Rende finished Rory Steele’s corner kick; then Will Birch scored twice, and Mahr once. Assists came from Birch, Mahr and Danny Jersey.

The freshmen won 4-1 against New Canaan. Ollie Lindenbaum had a hat trick, including a near post blast that brought the bench to its feet. Jared Wainshal scored the other goal. Josh Buckman played strongly.