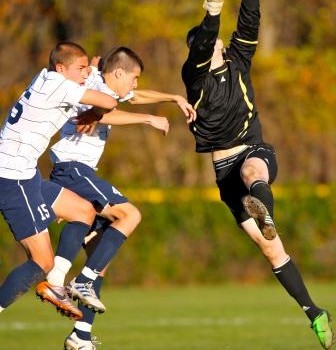 As fans around the state looked at LL state tournament 2nd round match-ups, Staples-Guilford stood out.  Both programs are consistently strong.  Both teams traditionally play smart, skillful soccer.  Both schools have won plenty of championships.

They’ve only met twice before in tournament play, since the Indians moved up from L to LL.  In 1992 the Wreckers won 1-0; in ’96 it was Guilford by the same score.

Today’s match, played in gorgeous weather before an enormous Loeffler Field crowd, started out all Staples.  But the guests fired the first telling shot, in the 7th minute.  Keeper James Hickok came up big, and suddenly the Indians were filled with confidence.

Sean Gallagher was a dynamo at center back — and he had plenty of work to do.  His speed and physicality were crucial, as the Wreckers were under the gun far more than they were accustomed to.

Hickok too had more action than usual.  He was equal to the task, saving high several times.  Other times his intelligent positioning kept Guilford at bay.

A minute later Bergonzi sprung Lorenz Esposito.  He was taken down in the box.  The call was immediate:  penalty kick.

But the PK flew wide.  The match remained scoreless — but not before Hickok once more saved huge.

In the 2nd half, the Indians continued to press.  The game flowed back and forth.  Greg Gudis’s shot was bobbled, by the normally steady Thomas Barcewicz — but no one followed up.

At the other end, Steve Denowitz cleared a dangerous ball off the line.  Guilford laced in the ensuing corner kick — and Hickok saved again.

In the 65th minute Court Lake earned a corner for Staples.  Steve Smith bent an inswinger into the box.  Chaos ensued — the sun was in everyone’s eyes — and the ball was knocked in by a Guilford defender.

The Indians had just 15 minutes to equalize — and they gave it their all.  Denowitz, Gallagher, Bergonzi and Jake Malowitz stood tall defensively — with Malowitz making a dangerous run forward that led to a free kick.

In the 69th minute, the Indians got the goal they needed.  James Carroll powered forward on a counterattack, and once again it was anyone’s game.

Five minutes from time, Gudis flicked on to Smith.  He had a near-open net — but Barcewicz played the angle well, and saved.

Before the 2 10-minute overtimes — which would be played to completion — the Wreckers regrouped.  They talked urgently about the need to go to feet; to stretch the field; to keep the ball low.

When the whistle blew, they finally began to play their game.  Bergonzi zoomed forward, off a stack.  A minute later — with 3:30 to go in the 1st OT — Scott took a long throw.  Gudis corraled it, and — unmarked for perhaps the 1st time all day — rammed it in.

Staples fought hard to protect their lead.  A Lesch to Gudis to Esposito combination nearly clicked.

But Guilford kept coming — and, when Gudis was injured with 5 minutes to go, the Indians ramped it up even more.  Hickok saved again — and then again — in the final 4 minutes.  Both were tough, in traffic, dramatic — and very, very clutch.

The Wreckers then rode out the clock.  When the final horn sounded they were happy — but realistic. They knew that, for 80 minutes, they had not played their best.

But they also knew they turned it on in the final 20.  They knew they’d gutted out a win.  They remembered last year’s 2nd round game — when they blew a 2-0 lead to Newtown, then rallied for a penalty-kick victory — and recalled that that match set them on their path to the state championship.

“There will be games like this,” said head coach Dan Woog.  “Teams that win titles have to win these types of matches — as tough and un-pretty as they are.  I told our guys to look forward now, and I know they will.  That’s what makes the state tournament so exciting.”

QUICK KICKS: The Wreckers’ quarterfinal foe on Saturday is the winner of tonight’s Norwalk-Simsbury match.  If the Bears win, the game is in Norwalk.  If Simsbury wins, it’s at Staples….

6 Responses to Staples vs. Guilford (State Tournament 2nd Round)