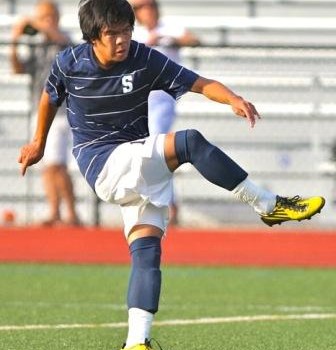 With most of Greenwich’s turf fields closed due to possible landfill contamination, the Wreckers traveled to the football stadium for a Columbus Day match with the 5-1-2 Cardinals.

The temperature neared 90, but Staples came out cold.  “We played like dead mice,” said head coach Dan Woog, and in the 7th minute Pieter Zenner caught them napping.  He scored from the corner.

Midway through the half, it was 2-0.  Zenner got his 2nd tally, again from the corner.

At which point, the Wreckers stepped it up.

They started knocking the ball around.  They played into the corner, they moved to support, they began communicating.

In other words, they started playing Staples soccer.

Just before halftime, Smith set up for a free kick 35 yards out, to the left of goal.  His shot skipped through several defenders, and into the far side of the net.

The solid comeback spurred the Wreckers to a stronger 2nd half.  Lorenz Esposito snuck through  a couple of times, and almost tallied.

In the 55th minute Taylor McNair played a short free kick to Tonsberg.  He took some space, found Dylan Evans in the corner, and then Evans hit Smith.

Smith passed to Esposito; he in turn fed Dylan Hoy.  The junior’s shot was stopped by the keeper, but not held cleanly.  It popped out; Hoy pounced, and rammed in his own rebound.

Staples kept pressing.  Greenwich had a couple of late chances, but most of their shots were long-range.  The Wreckers managed the match — and managed to pull off a nice come-from-behind win.

"I am Tonz" — Alex Tonsberg at work. (Photo by Carl McNair)

One Response to Staples vs. Greenwich