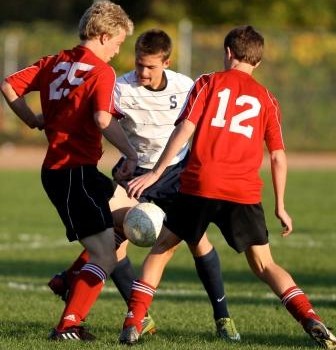 Staples-Greenwich is one of the longest-running — and best — boys soccer rivalries in the FCIAC.  Games are always well-played, and hard-fought.

This year’s match had an added twist.  Both teams were tied for 2nd place in the league.  Both needed a win to maintain any hope of catching leading Norwalk.  And both had overcome early defeats to surge during October.  Neither had lost in weeks.

A hard shot just 30 seconds in tested Staples keeper James Hickok; he fielded it cleanly.  The visitors continued to attack, but a solid tackle by Sean Gallagher initiated a counter — and presaged the way the 1st half would go.

In the 9th minute Greg Gudis stuck in hard at midfield, won the ball and send Max Hoberman in.  He was saved — but that play too foreshadowed much of what was to follow.

Court Lake and Brendan Lesch combined defensively, with Lesch covering vast swaths of territory.  They went forward — and so did Frankie Bergonzi, the tri-captain who had one of  his best games ever.

Jake Malowitz was injured early, but Ben Root stepped right in with a typically strong match, particularly in the air.

Mike Scott’s throw was, as always, a potent weapon — and so was his hard work, earning the ball against bigger foes and racing into the corner.

Lorenz Esposito and Jake Krosse were 2 more keys to the Wrecker attack.

The hosts’ passing game was on; so — thanks in large part to Gudis — was their ability to switch fields.

But Greenwich kept coming, and the halftime score was a nail-biting 0-0.

Staples’ halftime talk focused on the need to play more on the ground, away from the Cards’ tall and talented defenders.  Just 2:30 after intermission Gudis and Bergonzi fed Lake.  His shot was high, but the penetration was telling.

Gudis laced a dangerous free kick; Gallagher initiated an intricate series of passes; then Gudis, Bergonzi and Esposito combined to send Lesch in, for a just-high header.

In the 54th minute, the blue-and-whites earned a free kick 25 yards from goal.  Gudis stepped up — and laced a shot that went through the keeper’s hands.

But Gudis countered dangerously, and suddenly the tide of the close game turned.

In the 64th minute Bergonzi raced upfield, and laid off to Gudis.  He hit Steve Smith, then got the ball right back.  Gudis then unleashed a 30-yard rocket — and it was 2-0.

Scott, Smith and Gudis continued to press well — and hit defenders going forward.  In the 71st minute Smith’s inswinger from the corner found Bergonzi’s head.  He flicked on to Hoberman, who touched in for an easy — but well-earned — 3-0 edge.

Hickok was tested once more, in the 74th minute.  Once again, he was sure.

The coaches, players — and large Hill crowd — was delighted with the Wreckers’ 2nd straight strong performance.  As the regular season winds down, and FCIAC and state playoffs loom, the play is solid and the smiles broad.  Final score:  Staples 3, Greenwich 0.  Season record:  10-2-1.

The freshmen had back-to-back matches this week.  First they edged Norwalk 2-1, on a pair of strikes by Yousef Shahin.  Coach Chris O’Dell cited Jake McGibney for his excellent defense.  Then the frosh tied Greenwich 1-1, without 2 starters.  Diego Alanis squeaked in a goal with just 3 minutes to play, and showed strongly.  Jonathan Osorio had an excellent match in goal, while Connor Weiler played nicely at sweeper.

AJ Green gets air as he initiates a counterattack. Keeper James Hickok looks on. (Photo by Carl McNair)

Frankie Bergonzi wins one of his many headers against Greenwich. (Photo by Lisa Krosse)