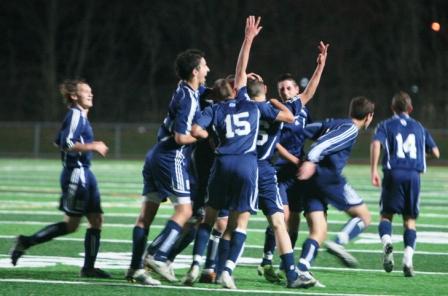 You couldn’t have scripted it better.

Staples’ game plan was to prevent the wide-playing upstaters from exploiting seams in the defense — and to attack the corners themselves whenever possible.  Glastonbury started with their usual relentless pressure, and it took a while for Staples to get their footing.

Once they did, they went forward well.  But the Tomahawks countered equally strongly, and much of the 1st half was a physical, nail-biting game of cat and mouse.

Just 4 minutes before halftime, Mike Scott worked the ball into the left corner.  Glastonbury’s defender tried to let the ball run out, but Greg Gudis stripped him of it.  The junior turned and launched a tough-angle, 40-yard shot.  It chipped the keeper, caromed off the far post, and clanked in.  Gudis has scored some remarkable goals this year, but this strike topped them all.

He was more right than he knew.

Forty-one seconds after the equalizer, Mikey Scott took a long throw.  Mikey Fitzgerald — Staples’ go-to header all year long — headed it along and in, off the post.

The Tomahawks forced keeper Michael McCarthy into a tough save with 10 seconds before halftime, but the Wreckers went into intermission up an important goal.

The coaching staff urged them to go in for the kill in the 2nd half.  Nine minutes in, Scott took another throw — and Fitzgerald once again “Fitzed” in a goal.  The tall defender has an uncanny ability to find a loose ball — and thanks to that talent, Staples again led by 2.

But Glastonbury had a long throw weapon of its own — Robert Stauble — and he gave the Wreckers a taste of their own Scott medicine.  In the 59th minute his rocket-like throw bounced around, and in.  Justlikethat, it was again a 1-goal match.

The blue-and-whites were learning as they played, however.  They defended better and better against the throw; they pushed up more than they had been; they plugged the gaps, and put Glastonbury on the defensive.

Still, the Tomahawks kept coming.  Matteo Marzoli cleared a ball off the line in the 69th minute; in the 74th minute McCarthy saved well. Defenders Fitzgerald, Jack Hennessy, Frankie Bergonzi and Sean Gallagher — who were under the gun often, but rose to the task every time — were at their best in the final minutes.

And Staples continued to press.  Unlike last year, the Westporters shrunk the field, absorbed pressure, and mounted counterattacks.  Mike White managed the game nicely, running forward into corners and possessing.  With 4 minutes to play, he just missed scoring himself.

The seconds ticked down — agonizingly, because the clock stopped with 2 minutes to go, and the center official kept time on the field — but Staples locked the door.  When the whistle finally blew, it sounded a sweet note:  The Wreckers had avenged last year’s defeat, and they head once again to the championship match.  Final score:  Staples 3, Glastonbury 2.  Season record:  21-2.

QUICK KICKS: Saturday’s final will be interesting.  Staples shoots for its 12th state crown — and first since 1993 — against New Milford, making its 1st-ever title appearance.  The Green Wave stormed back from a 2-0 semifinal deficit against a veteran Guilford squad, scoring 4 goals in the final 30 minutes to win 4-2.  The site and time of the game will be announced Thursday….

The Wreckers were cheered on by an enormous crowd.  Three fan buses traveled to West Haven.  The Top of the Hill Team — Staples soccer’s booster club — also sponsored a bus for the junior varsity and freshman teams….

The match was streamed live on WWPT-FM, and heard around the world by hundreds of anxiety-filled listeners….

Because New Milford (18-2-0) is seeded 6th, the #5 Wreckers will wear their home white uniforms on Saturday….

New Canaan beat Bunnell, to advance to the class “L” semifinals.  Two years ago — the last time the Wreckers were in the state finals — New Canaan was also a class L finalist (and eventual champion)….

The Staples-New Milford (LL) and New Canaan-Brookfield (L) state final matchups means that for the 1st time in years — perhaps ever — the 2 largest divisions feature all western Connecticut teams.

A jubilant Wreckers team celebrates Greg Gudis's goal — the 1st of the night against Glastonbury. (Photo by Carl McNair)

Mikey Fitzgerald finds the net against Glastonbury – the 1st of his 2 goals. (Photo by Carl McNair)

Brendan Lesch (ground) and Alan Reiter give Glastonbury everything they've got. (Photo by Carl McNair)

Mohawks have become a tradition for the Staples Wreckers — and Brendan Lesch, who has an entire set of clippers, is the designated barber. Last night he shaved Steve Smith's hair.