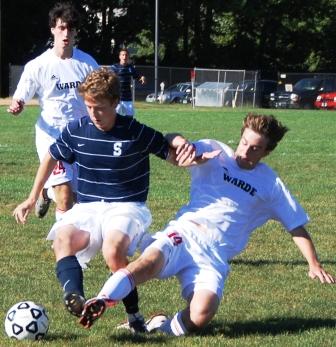 The Wreckers opened the 2010 season the way they ended 2009:  scoring quickly.  At the 4:00 mark Mikey Scott took a long throw on the left side.  Brendan Lesch turned the corner and fed Greg Gudis for a fast score on Fairfield Warde’s high-grass field.

It was the 4th straight year that Gudis has tallied Staples’ 1st goal of the season.

Lesch almost made it 2-0, off a Scott feed.  But 1 was all the Westporters could manage in the opening half.

The Mustangs had been coming on strong, regaining composure and gathering steam after the early strike.  They equalized 4:05 into the 2nd half, as Guthrie Carpenter headed in Kevin Petroccio’s long free kick.

The blue-and-whites buckled down then.  Playing with a bit more fervor, they went up 9 minutes later.  Scott’s long throw into the box was skip-headed home by central defender Steve Denowitz.  The score matched Denowitz’s previous career goal total for Staples.

The Wreckers tried to manage the game near the end, but Warde had several good chances — including a corner kick that was cleared off the line.

Staples had opportunities too, including a corner by Gudis and a cross by Max Hoberman.

“Warde did a great job,” said head coach Dan Woog.  “Their coach (Justin Ottavio) kept yelling ‘No regrets,’ and I’m sure they don’t have any.  We came too close to having some ourselves.

This was the 1st time since 1999 that the Wreckers let up a goal in their opening game.  That year they tied Trumbull 2-2….