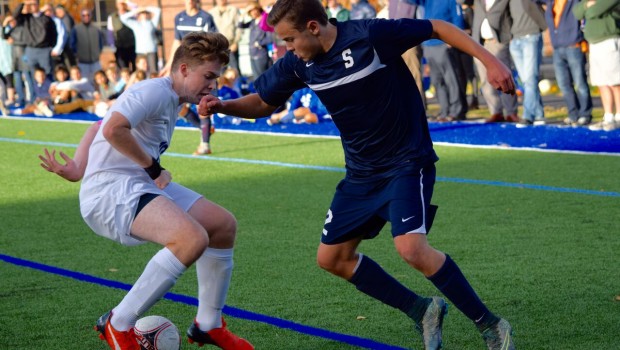 Staples had plenty of motivation today, in their FCIAC quarterfinal match at Darien.

Earlier this month, the Blue Wave got a goal off a throw-in just 5 seconds before the final whistle, tying the Wreckers 1-1 at Loeffler Field.

But the Westporters never found their rhythm today. With the wind blowing crossfield, the Wreckers could not put the ball on Darien’s great new turf. Instead they fell into a volleyball (or ping pong) style of play that did not serve them well.

Still, the 1st half was evenly played. Staples’ best chances came off a Josh Berman header (wide) and a corner kick with no one able to finish.

Eight minutes before halftime, Darien’s Jack Kniffin took advantage of a defensive whiff, slotting home from close range on the right side.

With 40 minutes left after intermission, the guests were ready to fire back. But just 1:31 after play resumed, a poor clearance into the middle led to a 2nd goal. Once again, Kniffin was there.

The Blue Wave kept Staples at bay for much of the rest of the match, with tight defense and balls launched out of the back. The tight passing Staples has been known for never got going, and — after a couple of solid Staples chances went wide — Darien rode out the clock.

“We’ve got a week and a half off. That’s a long time. We’ll catch our breath, shake off the bitter disappointment, and come back stronger than ever. We know that when we’re on, we can play with anyone. Our guys will be ready to prove that to everyone.” FINAL SCORE: Darien 2, Staples 0. SEASON RECORD: 8-5-4.

The reserves ended their season with a well-played 1-1 draw with Fairfield Ludlowe. Anton Mahr scored, from Ian Weiler. Coach Nicky Hoberman’s side ends their season at 10-3-1. Daniel Perez Elorza mixes it up at Darien. (Photo/MaryGrace Gudis)