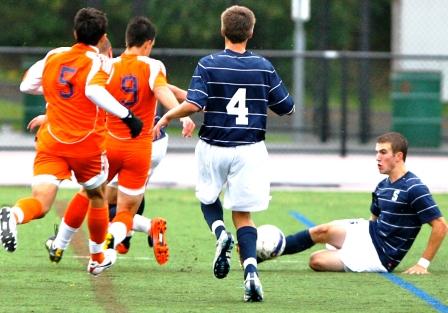 Today’s weather was not as windy or wet as Friday’s — but it did rain, and conditions at Danbury’s turf football stadium were far from ideal.

The Wreckers were missing starters Greg Gudis (sick) and Court Lake (injury), but they controlled play from the outset.  Their passing was sharp; the ball stayed low, and they used both flanks wisely.

Staples had good chances — particularly Lorenz Esposito’s header off Max Hoberman’s cross — but the match remained deadlocked until the 27th minute.  That’s when Alex Tonsberg fed Brendan Lesch at the top of the box.  The tri-captain tucked the crisp pass home.

Three minutes later it was Lesch again.  This time he picked up a clearance from the keeper, and quickly chipped him.

Tonsberg’s blast in the 31st minute nearly scored; so did Esposito’s shot 3 minutes after that, and then Frankie Bergonzi’s header off clever passes from Steve Smith and Mikey Scott.

Substituting liberally in the 2nd half, the Wreckers kept pressing.  Only a few starters remained, but 1 helped gave Staples extra padding in the 72nd minute.  Lesch played a great ball forward to Smith.  Starting in his defensive half, the junior remained onside, then outraced his defender to finish his 1st varsity goal.

Will Meinke did a solid job off the bench, helping hold down the center of the field, while AJ Green looked strong on the outside.  Final score:  Staples 3, Danbury 0.  Season record:  5-2-0.

QUICK KICKS: Danbury was coming off a tough 1-1 draw with Darien.  The Blue Wave scored with just 0.4 seconds showing on the clock.  Earlier this season, the Hatters edged Ridgefield 2-1…

Will Meinke holds down the center of the field. (Photo by Carl McNair)