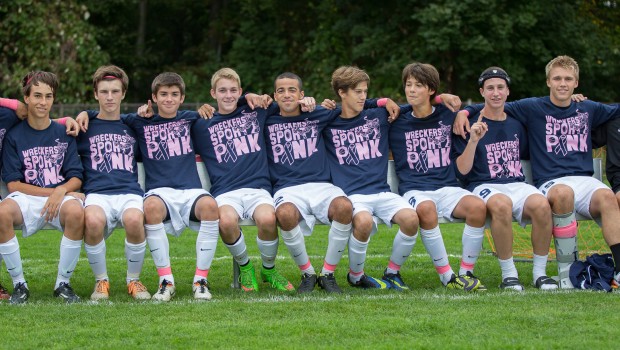 The Hilltoppers arrived at Loeffler Field fresh off a 3-2 win over intra-city rival Bassick. The Wreckers met them with a lineup that included 2 players making their 1st-ever varsity starts: sophomore goalkeeper Ziggy Hallgarten and junior defender Grant Sirlin.

The Staples coaches had their eye on Sirlin during preseason. They like his tenacity, his defensive instincts and his problem-solving ability. But a broken nose suffered in a preseason match at Choate sidelined him for nearly a month.

Intent on playing their trademark possession, spread-out-the-field style of play from start to finish, the Wreckers established themselves early. Michael Reid ran the show from the start at midfield, laying off and switching fields. He got plenty of help from fellow captain Patrick Beusse; together they formed a potent 1-2 combo.

It took just 15 minutes for the blue-and-whites to solve Central’s offside trap-minded defense. Nate Argosh flicked a free kick forward. Daniel Reid picked the ball up in stride, outraced the keeper, then chipped him. The ball caromed gently off the underside of the crossbar, for the sophomore midfielder’s 1st varsity goal.

The 2nd score came less than 3 minutes later. Sirlin drove forward into the corner. He found Daniel Perez Elorza, who was taken down in the box. Graham Gudis stepped up to take the penalty kick, and slammed it home with authority.

Emboldened, the Westporters kicked up their 1- and 2-touch passing. They hemmed the Hilltoppers in for long stretches. In the 35th minute, Aidan Wisher’s solid work in the left corner led to an outlet to Perez Elorza. His perfect slot into the box was finished well by Nate Argosh.

Hallgarten opened the 2nd half with a strong save. Back on the attack, the Wreckers earned a couple of corners. They pounced on loose balls, keeping the pressure up. Argosh pounced on a loose ball, settling matters conclusively.

When Daniel Brill, Luca Cocito and Denzel Robinson went in up top, there was no offensive letup. Sebastian Wick manned the right side of midfield; Sam Kantor and Andres Marmelo handled the center and left nicely, while Shane Dasbach, Jerrett Rende and Shane Dasbach held down the defensive fort. Noah Schwaeber’s late save insured the shutout.

2013 captain Diego Alanis was at today’s match, and yesterday’s training. He is on a break from his college at the Monterrey Technical Institute in Mexico…. Daniel Reid roars in on goal against Central. The sophomore midfielder scored his 1st varsity goal — and the game-winner — in the 15th minute. (Photo/Kim Lake)

Nate Argosh had 2 big goals against Central. This hard-won shot came in the 1st half. (Photo/Kim Lake)