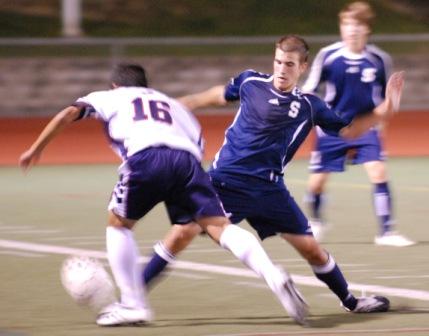 The Wreckers faced a well-organized Senator side on the Jack Casagrande Field turf — the 1st of a Staples-record 6 regular season night games this year.

After several chances — including a couple of headers off Mikey Scott throws, and 1 off the crossbar from Jake Krosse — the blue-and-whites hit paydirt.  Nifty passing between Alan Reiter, Greg Gudis, Mike Fitzgerald and Brendan Lesch culminated in a goal by Mike White.  It was crisp, clean — and a direct result of the previous day’s training, which concentrated on turning with the ball.

The tally came in the 13th minute — the longest it has taken Staples to score all year.

Gudis had the hot foot in the 1st half — including a 30th-minute left-footed rocket that caromed off the post, and keeper Bryan Daniello’s hand, so quickly that fans will have to wait for Sam Bender’s video to see what actually happened.

The half ended with Fitzgerald feeding Mikey Scott, for a 40-yard blast that flew just inches high.

The 2nd half opened with a White corner kick.  Lesch headed it directly on goal — but somehow a Senator cleared it off the line.

Six minutes later, Lesch’s header was true.  This time it came off Scott’s throw — which was earned by White’s hard work.

Reiter nearly connected in the 51st minute.  The hosts had the run of play for 20 minutes after that, but Staples managed the game.  Keeper Michael McCarthy and defenders Fitzgerald, Krosse, Jack Hennessy and Drew McNair kept the scoreline clean, and for the final 10 minutes the Wreckers were once again in control.  Final score:  Staples 2, Brien McMahon 0.  Season record:  4-0-0.

Sean Gallagher steps in to win the ball at Brien McMahon. (Photo by Lisa Krosse)

Drew McNair shows the form that makes him a defensive force. (Photo by Lisa Krosse)

One Response to Staples vs. Brien McMahon