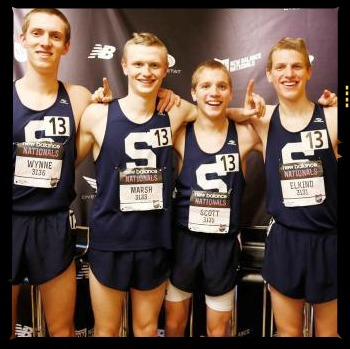 From the 1st team in 1958, Staples soccer players have also starred in other sports.

Mike Dill ’63 was a basketball captain (his coach in that sport was Albie Loeffler — the founder of the Staples soccer program also coached hoops, as well as baseball and track).

Chip Young ’68, Jon Hand ’69 and Steve Baumann ’70 all made their marks in soccer, basketball and baseball before starring on the pitch for Brown, West Chester and Penn, respectively.

More recently, Mikey Scott ’11 paced the Wreckers to an FCIAC baseball championship, and numerous indoor track titles. He was joined on the track team by — among many others — Sean Gallagher ’11. Jack Hennessy ’10 and Jack Scott ’14. And Mikey Fitzgerald ’10 and Steven Denowitz ’11 were part of several legendary volleyball teams. Those examples merely skim the surface.

“For soccer players who have the time, the interest and the talent, playing another sport is great,” says head coach Dan Woog. “It’s not for everyone. But there is a lot to be said for cross-training, learning other ways of doing things, hearing other coaching voices, and being put in different types of pressure situations. Standing at the foul line with no seconds left on the clock, at the plate with a 3-2 count in the last inning, or about to serve a key point — all those experiences help soccer players compete on the field.”

A recent “High School Sports Stuff” blog — by a former high school coach, now the athletic director for the Grand Forks (North Dakota) public schools — frames the “specialization vs. multi-sport” debate well. While acknowledging that playing more than 1 sport in high school is not easy — and not for everyone — he lays out the benefits for those who want to, and can, do it. Click here to read. (Highlights include a chart of the types of athletes recruited by Ohio State football coach Urban Meyer, and a very intriguing quote from hockey superstar Wayne Gretzky.)